Two digital pioneers who transformed food delivery are on course for a showdown after one launched an audacious bid to snatch its rival’s customers.

Deliveroo is poised to hire thousands of extra delivery riders so that it can start offering its services to UK takeaway restaurants for the first time – putting it in direct competition with Just Eat.

The expansion will see it target the nation’s chip shops, kebab houses, curry restaurants and Chinese takeaways that have so far been in its rival’s grasp. 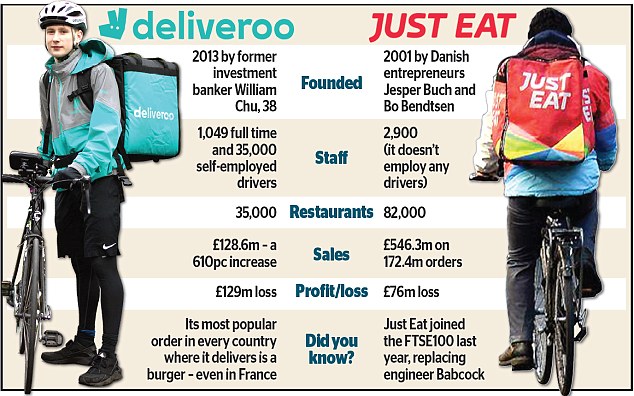 The two firms have become the dominant forces in the rapidly growing food-delivery market, but they have so far avoided all-out confrontation because of their separate business models.

Just Eat allows small takeaways that already have their own drivers to use its branding and app to boost sales.

Deliveroo, meanwhile, has focused on partnerships with independent restaurants and branded chains that lack delivery staff.

William Shu, Deliveroo’s founder and chief executive, said the expansion would mean takeaways with delivery staff would be listed on its app and website.

The restaurants will also be able to call on Deliveroo’s riders to deliver food during busy periods.

Shu added: ‘Deliveroo’s growth is matched only by our ambition.

‘This is the next big step in our plan to offer customers an even greater choice of restaurants, at a greater range of prices while continually improving service.’

Deliveroo’s service will launch next month and the firm hopes it will lead to it teaming up with 5,000 more restaurants in the UK, in addition to the 10,000 it already works with.

Just Eat said last year it was looking at working with restaurant chains – a move that would encroach on Deliveroo’s territory.

Shu said: ‘My ambition is for Deliveroo to become the definitive food company. I want to have one app that is a one-stop solution.’

London-based Deliveroo was founded five years ago and has grown to about 2,000 staff and 15,000 self-employed riders, known for their black and green uniforms. Its partners have mainly been restaurants and chains such as Byron, Wagamama, Carluccio’s and Mission Burrito.

Just Eat, on the other hand, does not provide delivery drivers and has largely worked with takeaways that use its app and website to accept orders and process payments.

The firm has since soared in value and entered the FTSE 100 last year, taking the place of engineer Babcock in what was seen as a symbolic moment.