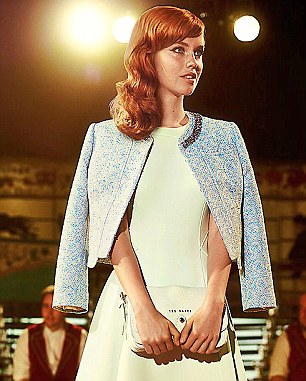 In the spotlight: The brand was founded in 1987 in Glasgow

Upmarket fashion retailer Ted Baker is set to defy the doom and gloom on the High Street when it posts results this week.

The £1.4bn listed high street firm is tipped to post profits of £74m, some 12 per cent higher than the previous twelve months.

The brand was founded in 1987 in Glasgow and now has fans including Kate Middleton and Amal Clooney as well as millions of ordinary women.

Ray Kelvin, its eccentric 62-year-old founder and chief executive, has put its success down to cautious expansion and not trying too hard.

He said: ‘We don’t make ourselves so readily available, we don’t oversell and we’re not hungry for profit.’

Kelvin was brought up in Cockfosters, North London, which his late mum Trudie told him to pronounce ‘Co’fosters’ to sound posher.

He chose to call his business – now worth nearly £1.4bn – ‘Ted Baker’, because he didn’t want his own name associated with it in case it went bust, claims one version of the firm’s founding tale.

Kelvin has previously described Ted as ‘a pioneering fashion icon, an intrepid aviator, an all-round sportsman and consort of princesses and Hollywood beauties’.