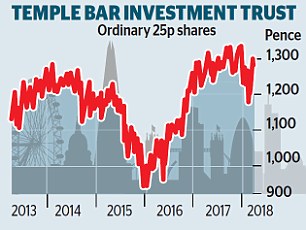 WHAT DOES IT DO? Alastair Mundy, the fund’s manager, looks to grow investors’ income and capital over the long-term, aiming to beat the FTSE All Share by investing primarily in UK firms.

WHAT DOES THE MANAGER INVEST IN? The majority of the portfolio is made up of FTSE 350 firms.

Mundy likes to invest in businesses that look cheap relative to the market and that have fallen out of favour with investors.

Financial services firms make up 25 per cent of the fund’s investments, with names such as HSBC, Barclays, RBS and Lloyds all featuring in the top ten holdings.

Others include Royal Dutch Shell, Glaxosmithkline, BP and Tesco.

WHAT DO THE EXPERTS SAY? Ben Yearsley of adviser Shore Financial Planning said: ‘Alastair is a contrarian investor, meaning he looks for stocks that nobody else likes. I think this style will prove effective going forwards.’

WHAT DO THEY LIKE? Yearsley said: ‘I think Alastair is a really good manager. The UK domestic market is looking very cheap at the moment, so I think now is the time to look at this area of the market that has been so unloved by investors.’

Yearsley also pointed to the fact that the fund is relatively cheap, charging an annual fee of 0.49 per cent.

ANY DOWNSIDES? Like any funds that invest primarily in one country, it is at the mercy of investor sentiment, meaning there could be sharp falls in the value of the investments over the short term.