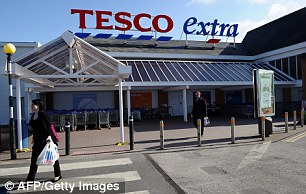 Shake-up: Tesco is simplifying shelves, boosting its own-label offera nd slashing the number of suppliers it works with

Tesco is stripping thousands of brands from its shelves in a shake-up aimed at beating the discounters.

Kerrygold Spreadable butter and Higgidy pies and quiches are among the brands to have lost space in recent weeks.

Tesco is simplifying shelves, boosting its own-label offer and slashing the number of suppliers it works with over the next two years, under a shake-up dubbed Project Reset that started in 2015.

Chief executive Dave Lewis yesterday stressed it had not damaged relationships with suppliers, as he reported a 2.1 per cent rise in sales in its UK stores for the first quarter of the year, the tenth quarter of growth in a row.

The supermarket faces growing competition from the likes of Aldi and Lidl.

Sainsbury’s takeover of Asda is also a threat, leaving the merged grocery company as the second biggest supermarket in the UK.

Lewis said the Government should think about potentially changing the way business rates are calculated amid the pressure on the High Street.