Tesco is set to launch a chain of discount shops to take on cut-price German retailers Aldi and Lidl at their own game.

The supermarket giant has earmarked as many as 60 existing stores to transform into a low-price chain expected to operate under a new brand name.

Sources speculated that the stores may be called Jack’s – a reference to Tesco founder Jack Cohen – because an obscure Tesco subsidiary recently tried to register the name as a trademark. However, it is not clear whether approval has been granted and the new name remains a closely guarded secret. 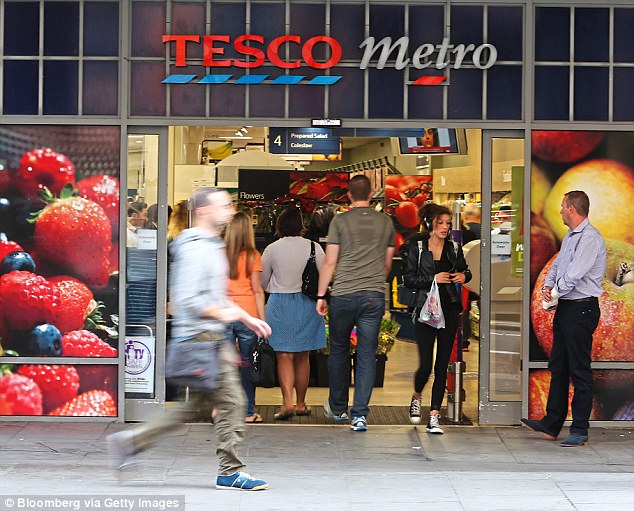 Counter-attack: Scores of existing stores are to be rebranded

Tesco, which declined to comment on the plan, has begun advertising for staff and is offering £9 an hour – more than its standard wages. The new stores could open as early as September.

Aldi and Lidl have doubled their share of the UK grocery market to almost 13 per cent in five years. Tesco and its rivals have tried to fight back by launching new product ranges, cutting prices and closing poorly performing stores. Now Tesco has decided that if it cannot beat them, it will join them.

Putting his tanks on the discounters’ lawn is the boldest move yet by Tesco chief executive ‘Drastic’ Dave Lewis, who took over in 2014 after a £250 million black hole in profits emerged under his predecessor. Lewis has since steered the supermarket chain back to health. Profits have bounced back to more than £1 billion and he recently forged an alliance with French group Carrefour.

One source said Tesco could open 50 to 60 stores in the first wave. In some areas it has closed stores to be refurbished in readiness for the discount launch. Locations are said to include London, Cambridgeshire, Lincolnshire and Liverpool.

Analyst Steve Dresser, of market researcher Grocery Insight, said: ‘It’s difficult to take on Aldi and Lidl, but if Tesco can get it right this could run and run.’

He said Tesco was busy combing through its existing 3,400 stores to find the best locations for the project. These are believed to include Metro town-centre convenience stores that have so far failed to respond to Lewis’s medicine.

Dresser said: ‘There is an opportunity to look at any stores still struggling and say, ‘let’s see if we can try something else here rather than closing them and losing them to a competitor’.’

He pointed out that Tesco had introduced a number of own-brand discount labels including its ‘farms’ brands, Miss Molly’s and Hearty Food Co, adding that these had already helped to narrow the price gap with Aldi and Lidl.

The discount chain move is likely to be scrutinised by Tesco investors concerned the stores will steal custom from its main chain.

But Bryan Roberts, global insights director at marketing group TCC Global, said: ‘It’s better to eat your own lunch than stand by and have someone eat it for you.’

He said Tesco should ‘avoid a complete facsimile of Aldi or Lidl and come up with something different because otherwise it’s not going to be compelling enough to win shoppers back from the Germans’.

Roberts added: ‘The key thing is scale. They need to go at it hammer and tongs otherwise it will never escape the shadow of their main business.’