Gavin Patterson will lose a £3.5million bonus after he was ousted from his job as BT’s chief executive.

Although Patterson will keep his full pay and perks until a replacement is found, he will be stripped of a lucrative share award that was supposed to pay out this year.

This award would have given him shares worth around £3.5million if they had vested in full.

Payouts for Patterson had already sparked controversy after he earned a £1million pay rise last year despite the firm’s disastrous track record.

Shareholders have grown increasingly frustrated over the past year with BT’s performance, and more poor results last month proved to be the final straw.

The decision to sack Patterson kicked off a global search for his replacement.

Du Plessis said he was ideally seeking candidates from outside the company in the telecoms and technology industries, although he did not rule out candidates from inside BT.

‘It needs to be someone who understands the industry,’ he said.

The external appointment signals a change in strategy for BT that could see it move away from spending lavish amounts on football rights and focus instead on core services.

It is understood that Du Plessis, 64, is keen for the business to focus on becoming a great infrastructure and technology firm once more.

Who Will Be The Next BT Boss? 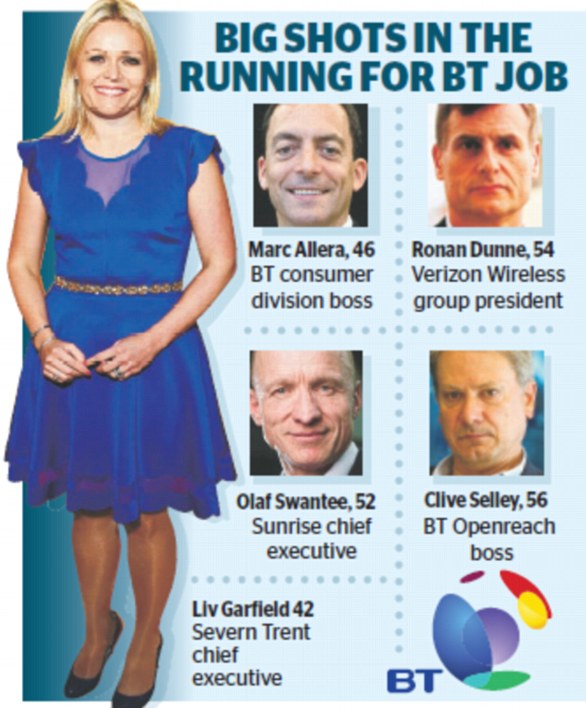 BT chairman Jan du Plessis is understood to be looking outside the firm for a replacement for Gavin Patterson.

Leading candidates include Liv Garfield, the 42-year-old boss of Severn Trent water firm, and this year’s winner of the Veuve Clicquot award for leading female businesswoman.

Garfield is an expert on infrastructure having previously led BT’s cables division Openreach.

Other leading names are Dutchman Olaf Swantee, 52, who runs Swiss digital firm Sunrise, but has previously run mobile firm EE before it was sold to BT.

Another choice is Ronan Dunne, the 54-year-old who once ran O2 and is now the European chief of US internet firm Verizon.

Until yesterday, the top internal candidate was Marc Allera, chief of EE and BT’s consumer division.

Out of the running are thought to be Jeremy Darroch, boss of Sky, and Vittorio Colao, who recently quit as chief of Vodafone.

The South African intends to find a replacement for Patterson – who will stay in job until his successor is chosen – in the next few months.

Meanwhile, Marc Allera, the head of BT’s consumer division, has long been seen as a favourite, and Severn Trent boss Liv Garfield and Clive Selley, the boss of BT’s Openreach cables arm, are also seen as contenders.

Patterson took over as BT’s chief executive in 2013 and has overseen a £5billion spending spree on sports television rights as part of efforts to take on rival Sky.

The decision has drawn criticism from the regulator Ofcom and others who argue the company should be focusing on ploughing cash into upgrading its broadband network.

Patterson’s exit was announced weeks after he unveiled a radical turnaround plan, including a decision to axe 13,000 staff.

The overhaul is part of efforts to modernise BT as it faces competition in the broadband market and focuses on offering packages that bundle internet, mobile and television services.

It is also an attempt to revive the company’s fortunes after lacklustre results, a £500million accounting scandal in Italy and battles with regulators over broadband pricing.

In the weeks that followed Patterson’s turnaround plans, du Plessis said shareholders made clear they had lost confidence in the chief executive.

He said: ‘No one questioned the strategy but what did become apparent was the results had disappointed and, frankly, support for Gavin was dwindling.’

After Patterson’s departure was announced, the father of four said: ‘This is a tough job. It can be a gruelling job. Five years is a typical innings of a chief executive of BT.’