A surge in demand for bungalows from retirees has prompted housebuilders to think outside the single-storey rectangular box and design ones more suited to modern life.

Expect the mix to include super-size chalet bungalows with space for a lift and so-called ‘barn-galows’ — one-and-a-half-storey homes with bedrooms both upstairs and down.

Retirement developer McCarthy & Stone is getting in on the action, building two and three-bedroom bungalow communities across 22 of its developments. 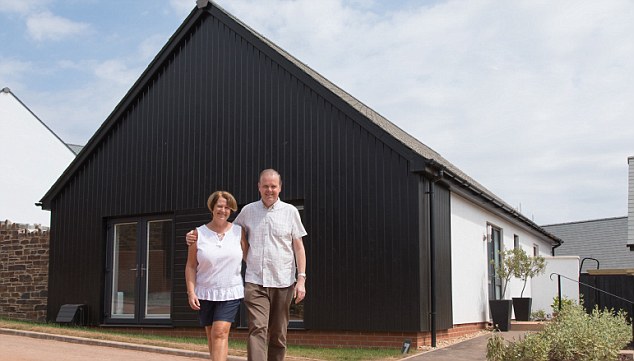 A national survey carried out by Sarah Beeny’s estate agent, tepilo.com, revealed that 51 per cent of bungalow homeowners were ‘very happy’ with their low-rise homes — considerably more than any other type of homeowner.

Dr Stephen Ladyman, former health minister responsible for social care and founder of the developer Oak Retirement, believes that bungalows offer a different choice for those looking to secure independence in later life.

‘Many older people are wary about moving from a house to an apartment, so a bungalow gives them that extra sense of independence,’ he says.

Oak’s £35million Friary Meadow scheme — due to open in Titchfield, Hampshire, in November — will feature apartments, townhouses and six bungalows, with on-site care, a restaurant and communal facilities.

‘Living in a bungalow offers low-maintenance, safe and eco-friendly living with optimum use of space for ideal comfort,’ adds Dr Ladyman.

However, he does caution: ‘The downside is that they can be expensive, so older people should keep an open mind and look at apartments or well-adapted houses as well.’

Retired couple Andy Campbell, 65, and his wife Pam, 63, have recently moved into a Millwood Designer Homes chalet bungalow at Brambledown in Maidstone, Kent, attracted by its unusual architecture and extra space.

‘Our ultimate reason for moving was to find a bungalow that suited our changing needs,’ says Andy.

‘We’re both getting older and no longer want stairs.

‘The architecture of the home is interesting — it’s not a typical new-build.

‘All the houses are pretty and there are only two other homes like ours on the development.’

The scheme is now sold, but others are being planned for a development in Yalding, Kent.

In Berkshire, Spitfire Bespoke Homes has built a mixed-generation development, Jardin in Binfield, with six two-bedroom bungalows designed for the over-60s, priced from £445,000.

Meanwhile, housebuilder Baker Estates plans to include bungalows in 80 per cent of its schemes in Devon and Cornwall.

‘Many new-home builders don’t build them as they want to maximise the revenue on each development.

‘We want to build a range of property types that appeal to the needs of all buyers.’

‘Our home has given us far more space than we expected,’ says Debbie.

‘We don’t feel like we have lost volume because the bungalow has been designed so cleverly.’

Neighbours Fraser, 66, and Polly Nute, 68, bought a four-bedroom ‘barn-galow’, which, they hope, will take them into retirement.

‘It has two bedrooms upstairs and the main bedroom, as well as an en-suite bathroom downstairs to future-proof later-life living when the stairs become more of a challenge,’ says Fraser.