Millions of hard-pressed savers have been left in the dark over whether they will benefit from the increase in the Bank base rate.

Although it is 24 days since the Bank of England sanctioned a 0.25 percentage point rise in its base rate to 0.75 per cent, more than three-quarters of savings providers have still yet to disclose how they are going to respond – if at all – to the hike.

Among the biggest culprits are the country’s building societies, which make much noise about being customer friendly and insist they are not in business to maximise profits – unlike the banks. 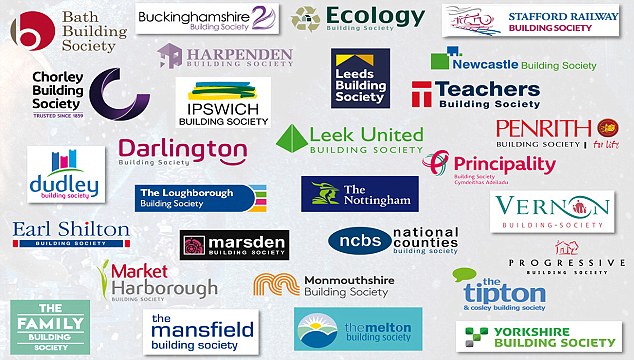 Analysis by The Mail on Sunday shows that 29 societies out of a total of 45 have yet to announce the interest rate increases they may pass on to savers with money in variable rate accounts.

Included are some of the biggest – Leeds, Principality and Yorkshire – as well as societies that are regionally focused and have branches in communities that the big banks have long deserted.

In some cases, building societies have not increased interest rates on selected savings accounts since the Bank base rate turned the corner in November last year, when it was raised from 0.25 per cent to 0.5 per cent.

It means many savers are now earning derisory rates of interest – even lower than those offered by the big high street banks, which have a well-earned reputation for offering savers poor value for money.

Ros Altmann, a former Minister at the Department for Work and Pensions, says it is ‘shocking’ that only a minority of financial firms have passed on the base rate rise to savers. 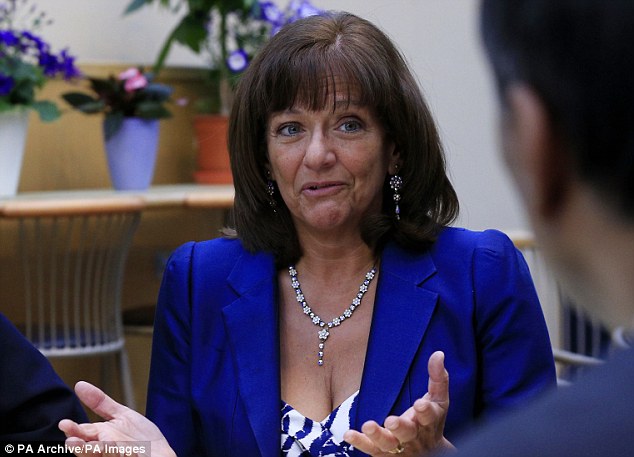 She adds: ‘The majority of companies have taken the decision to increase their profit margins rather than reward loyal savers. It is Scrooge-like.’

Caroline Abrahams, charity director at Age UK, says: ‘Many banks seem to race to pass rate cuts on to savers, but drag their feet when rates rise. This is deeply unfair on the millions of older people who hoped to buoy up their retirements with interest on savings. Even small extra amounts of income can make a difference to older people, so it is high time financial institutions played fair by savers.’

Anna Bowes, a director of rate scrutineer Savings Champion, says: ‘It has been more than three weeks since the Bank of England increased base rate, yet 76 per cent of savings providers have still not disclosed what they are planning to do, if anything. It is an unacceptable state of affairs.’

Bowes says it is inevitable that some savers will ultimately be left disappointed by the response of their bank or building society. When the base rate was pushed up late last year for the first time since July 2007 and the onset of the financial crisis, the interest rate on half of all variable savings accounts remained unchanged. She adds: ‘I am afraid to say that we are expecting more of the same this time around. The link between base rate and savings rates has become irrevocably severed. Savers are being punished unmercifully.’

The savings expert is so outraged that she believes some providers should be held to account for the ‘unethical way they are treating their customers’.

‘This is profiteering of the worst order’ Rob Macfarlane believes banks, building societies and other institutions that refuse to increase savings rates in response to the latest rise in base rate should be ‘named and shamed’.

Already angry that the interest on half of all variable rate savings accounts remained the same following last November’s base rate rise, he says savings organisations should not be allowed to ‘win twice’ by failing to pass on the most recent increase. ‘It is greed, profiteering of the worst order,’ he says.

Rob, a professional buy-to-let investor and a part-time scout for a football league club, says savers like him are not getting a fair deal from many organisations. ‘The rates are nothing short of scandalous,’ he says.

The 66-year-old widower, who lives in Stafford, constantly juggles any spare cash between savings accounts to maximise his interest payments. He is meticulous, including interest bearing current accounts and loyalty savings accounts with Nationwide Building  Society within his portfolio.

Last month, the City regulator outlined plans that would require banks and building societies to pay a minimum ‘basic’ savings rate on all easy access accounts and cash Isas open for more than a year.

The tardy response to the last two rate hikes now makes it more likely that the Financial Conduct Authority will go ahead with such a move. Its research indicates that savers could be £300 million a year better off if such a basic savings rate were introduced, although such an initiative has received criticism from some quarters. This is because the regulator would allow banks and building societies to determine their own basic rate – only stepping in if it deemed the rate not to be fair.

Where are we now

Data from Savings Champion indicates that only 32 financial institutions have so far adjusted savings rates in response to this month’s base rate rise. But few of these have passed on the full 0.25 percentage-point increase to all savers – the exceptions being building societies Beverley, Holmesdale and Swansea.

Bowes is disappointed that the mainstream banks have given little extra interest to customers who have popular instant or easy access accounts. She says: ‘Lloyds Bank has increased rates on just two of its accounts. But it has chosen to ignore savers who have funds in Easy Saver. This will continue to pay 0.2 per cent.’ Barclays has tickled up its Everyday Saver rate by just 0.05 percentage points, while HSBC Flexible Saver, NatWest Instant Saver and Santander Everyday Saver rise by only 0.1 points.

The decision of 29 building societies to hold back on higher savings rates – some may well push up rates before the end of the month – means some of their accounts are now paying what can only be described as derisory rates. For example, Darlington offers interest of between 0.05 and 0.1 per cent on Instant Access while Dudley pays the same on Instant Tracker (a misnomer – it tracks nothing).

Some building societies admit that a desire to remain competitive in the mortgage market has stopped them pushing up savings rates.

Leeds says: ‘We have kept our standard variable mortgage rate at 5.69 per cent and as a result we have not committed to increasing variable savings rates, which compare favourably against the market.’

Nottingham says: ‘We continue to assess the positives of an increase for savers against increased rates for mortgages.’

Fed up with your provider’s paltry rate? Then switch now 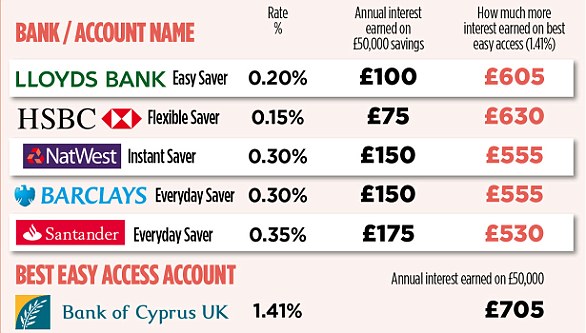 If a saver switched £50,000 of funds from any of these accounts to Bank of Cyprus UK, they could earn a minimum of £530 extra in interest and a maximum of £630

The table above compares the annual interest that can be earned from five popular easy access high street accounts to the best comparable account available.

It shows that if a saver switched £50,000 of funds from any of these accounts to Bank of Cyprus UK, they could earn a minimum of £530 extra in interest and a maximum of £630.

If they transferred £85,000 – the maximum amount per bank covered by the safety net of the Financial Services Compensation Scheme – the annual income boost could top £1,000. An account with Bank of Cyprus UK is covered by the scheme.

Savers prepared to tie up their money in a fixed-rate bond could earn even more interest – two per cent plus – although it would mean them tying up their money for the bond’s life.

Accounts with notice periods on any withdrawals are also an option.