THREADNEEDLE DYNAMIC REAL RETURN: Total belief of the fund boss who puts money where his mouth is 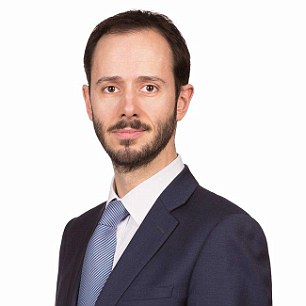 Safety net: Toby Nangle avoids investing in City offices, which may be hit by Brexit, favouring the shires

Global equities have had a fantastic few years and investors have been repaid handsomely for taking on the risk of putting cash in volatile stock markets.

Those of a more nervous disposition who opted for ‘total return funds’, which aim to protect capital in turbulent times while offering the potential for growth, have not been so generously rewarded.

Being ‘a bit greedy and fearful’, in the words of Toby Nangle, manager of Threadneedle Dynamic Real Return fund, means accepting that returns will not shoot the lights out.

Total return funds aim to spread the risk by investing in other top class funds. This means they can benefit from the skills of experts in certain sectors without having to blow as much money on their own specialists and research.

The upshot is that charges tend to be higher, as investors pay the fees of the underlying funds, as well as the main one.

Nangle gets round this by selecting mostly from a basket of in-house funds run by hundreds of experienced colleagues at Columbia Threadneedle group.

Jason Hollands of broker Tilney says: ‘While the predominant use of in-house funds rather than ‘best of breed’ funds across the industry has limitations, the benefit is that the manager can do this very cost effectively and Columbia Threadneedle has a broad range of competencies.’

Nangle says the advantage of funds like his is that they ‘smooth out the bumps in the road’ while providing positive returns.

About 15 per cent of the fund is invested in Japan, while just 5 per cent in the UK

His fund has an annual target of inflation plus four percentage points and it has hit this over the five years since it was launched.

To meet the target, Nangle says each holding must ‘earn its place’. He expects investments in Japan to contribute strongly. Just under 15 per cent of the fund is invested there. By contrast just 5 per cent is in the ‘sluggish’ UK market – and the US does not get a look in.

Nangle says: ‘It’s not because it is a horrible place but the tax-cut fuelled growth is already priced into the market. Where the US has seen earnings grow 55 per cent in the last five years, over the same period Japan’s earnings have doubled and we think they will be even stronger. Also the Japanese market is cheaper relatively speaking than the US.’ Nangle says: ‘We want to avoid big shiny City office blocks that could be hit by Brexit’

At the less glamorous end of his portfolio are shorter-dated corporate bonds, whose yields of 2.5 per cent still beat cash. That modest ‘bedrock’ income is added to by a juicier 5 per cent yield from commercial property, via the Threadneedle UK Property Authorised Investment fund.

This has a wide spread of income-generating properties such as offices and warehouses in market towns across the UK. Nangle says: ‘We want to avoid big shiny City office blocks that could be hit by Brexit.’

Nangle has a strong enough belief in his fund’s strategy that he puts his money where his mouth is. He says: ‘All of my own money and my children’s Isas are held in it.’

Hollands at Tilney also likes the fund. He says: ‘It has been on our buy-list for three years and delivered steady eddy returns, with low levels of volatility.

‘Unlike many rivals in the sector it does not rely on derivatives and ‘short selling’ to achieve its goals. Instead it invests across a wide range of asset classes and sectors and actively moves between these based on the manager’s view of opportunities and risks.’