Tips for homeowners using a septic tank or cesspit

Where there’s muck there’s brass – especially for companies serving the 3.5 million people not on mains sewerage but using a septic tank or cesspit.

The annual bill for living with your own sewage system is usually at least £100 – the cost of emptying the pit. On top are maintenance and installation fees that can cost you £5,000 or more.

The average water bill for all homes in Britain is £405 a year. This total is made up of two parts, of which at least £200 goes on handling sewage. Homes not on main sewage do not pay this fee. 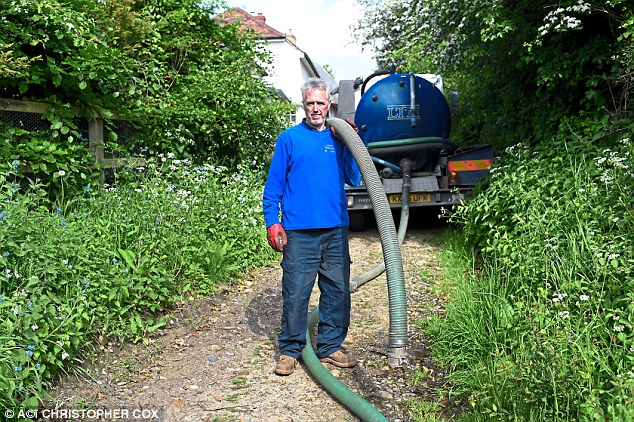 But any savings are gobbled up by the cost of treating your own waste.

Tough new rules introduced three years ago by the Department for Environment, Food & Rural Affairs means any new systems must not pollute the land.

Steve Lewis is a sewage expert, based in Little Canfield, Essex. He says: ‘People, understandably, do not like to dwell on their waste needs – so are often in the dark as to the best and most cost-effective way to deal with their sewage.

‘Yet the servicing of septic tanks and cesspits is an industry that relies on offering good customer service for repeat business. Local providers have a reputation to uphold in their community and are often the best first port of call.’ 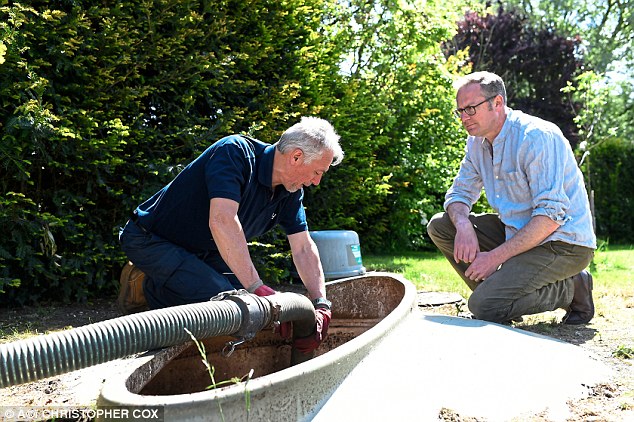 Thick of it: Steve gets to work at writer Toby Walne’s house

From reed beds to cesspits, the ways to drain your waste

Septic tank: A tank buried in the garden that runs into an attached soakaway. Although traditionally the most popular option, new pollution rules mean such systems are no longer so common – though if you already use one it is not affected by recent legislation. If you need to repair or replace the tank in the future, you will have to invest in a large hygienic soakaway system that must be well maintained. The tank is often emptied once a year.

Aerated sewage tank: Waste goes into a tank where it is aerated – with oxygen-breathing bacteria breaking down dirty sewage. Treated sewage then leads off into an irrigation soakaway. Alternatives include rotational machines as well as non-powered filtering systems. Often includes a blower and pump that works around the clock – using £50 of electricity a year. Prone to occasional breakdown so a regular service is often advisable – but it can cost hundreds of pounds.

Cesspit: A huge tank buried in the ground that collects sewage and dirty water waste. The only way it can escape is usually by being taken away by tanker. We each use on average 150 litres of water a day – so in theory a family of four could call out a tanker once a month to have it emptied. But old-fashioned cesspits were often built of brick so that waste naturally seeped out into the ground. Households with these can limit emptying to once a year.

Reed bed: The common reed has the ability to transfer oxygen out through its roots if laid in a gravel bed. The plant can help digest pollutants in sewage. Often used as a secondary treatment for drainage coming out of a septic tank. Usually requires pumps and reed maintenance plus additional soakaway area.

Steve runs his firm Luxury Toilet Hire with wife Sharon and son Richie. He visits at least half a dozen homes a day emptying sewage using a 1,000-gallon truck.

He says: ‘We use a small vehicle because in a rural community tanks can be hard to reach at the back of a garden. A big tanker can struggle down rural lanes.

‘Wearing fancy hard hats and high visibility jackets looks professional but it is often just for show. What is most important for the consumer is to receive a clean and efficient service. Picking someone you trust is invaluable in the case of an emergency – for example, if drainage gets blocked or a pump breaks.’

The 57-year-old former accountant charges £110 to empty a sewage tank – a task he recommends undertaking at least once a year no matter what system has been installed. 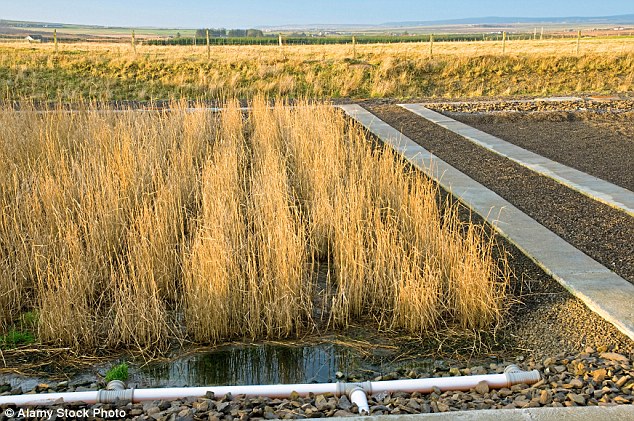 Standalone cesspits may require more frequent emptying while a septic or aerated treatment tank also needs emptying despite a soak-away as slurry builds up that must be removed.

He also points out that problems can occur due to a build-up of fatty deposits from kitchen waste that can block pipes. Homeowners should not pour melted animal fat down the sink but leave at the side in a container to solidify and later throw in a bin with general waste.

When my family moved to the countryside five years ago, we were welcomed by a waft – not of manure but essence of human excrement, writes Toby Walne.

It turned out we had been left with a broken Klargester. It was hidden under a large green plastic lid in the garden, storing and treating raw sewage that drained into the surrounding countryside without causing pollution.

The ‘blower’ that aerated waste was broken. I found the paperwork and discovered Kingspan had installed it. I paid £100 to have the sludge removed and another £200 for a new pump. On top, I paid for someone to come out. I also forked out about £300 for a ‘gold’ contract, entitling me to a 30 per cent reduction in the price of labour and parts. A year later, I cancelled – assuming that having handed over £600 I would be safe.

Roll on four years and that sweet countryside smell was back. The blower was not working so I paid £110 to Luxury Toilet Hire for an annual clean and contacted local firm Fyfe Wilson of Bishop’s Stortford, in Hertfordshire, to fit a reconditioned pump for £240 – half the price of a new one.

But the tank began filling up fast so a week later another £110 clean- out was required. The engineer returned. The pump had accidentally been turned off.

Most modern systems include a septic tank dug at the bottom of the garden where sewage is naturally treated by an aeration system where microbes break down the waste. It then drains or is pumped into soakaway chambers deep in the ground.

If you already had a septic tank prior to 2015 it need not be adapted unless it has to be repaired or replaced at some stage.

The latest equipment, such as the Klargester by Kingspan, Balmoral and Clearwater, enables homes to have their waste digested by bacteria in a variety of ways – turning or mixing it with air. But such equipment often requires mechanical elements such as blowers and pumps to work 24 hours a day. It means that occasional breakdowns can be expected and servicing might be advised.

Paul Sloan, of Kingspan, says: ‘To ensure the smooth running of a system offering sewage treatment, regular service is advised. A good way to pay is via an annual contract. It may seem expensive but it means that should unexpected problems arise you have already paid for it.’

For example, Kingspan charges £440 a year for a ‘gold’ contract – with costs spread out via monthly payment. This deal includes ‘free’ parts and call-outs for any problems plus a service check at the end of the year. But to get such a deal you must also pay an extra £205 for an ‘initial service visit’ – landing you with a total bill of £645.

As expensive as this may sound, the cost of repairs to a typical £5,000 system can soon add up. If you do not have a contract with Kingspan, it charges £293 for a call-out. On top, you might pay at least £180 for replacement parts.

Without a regular service contract, budget at least £400 every five years to replace a blower motor or have a pump replaced. This is on top of the £100 a year spent on emptying excess sludge – where a tank lorry turns up and sucks up excess mess.