TONY HETHERINGTON: Cruise that led to a legal stitch-up

G.H. writes: While we were on a cruise with Thomson (now called TUI), my wife was injured by a member of the ship’s staff who took a short cut through a fire door that opened on to the deck. This part of the deck was a designated smoking area, with an ashtray next to the door. There were no warning signs.

My wife needed seven stitches in a gash to her leg. The ship’s doctor gave us a wheelchair for a week, but the holiday was ruined. Our solicitor took the case on but TUI told him it must be dealt with under maritime law in the Admiralty Court in London. This would involve using an expert barrister. TUI must know few people can fight them this way. 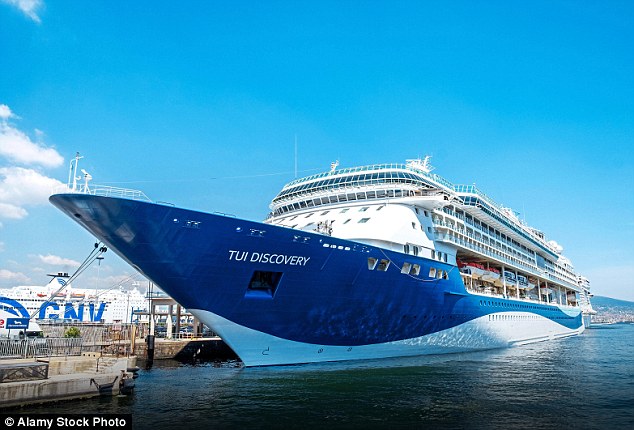 Injury: An accident happened on board the TUI Discovery

There seems to be no dispute over what happened during your holiday on the TUI Discovery cruise ship. Your wife was in what should have been a safe place, set aside for smokers. The crew member opened a heavy metal door from the inside, hitting her and leaving her bleeding from an open wound that required emergency treatment from the ship’s doctor.

A report signed by the doctor shows the wound needed cleaning and dressing every day for the rest of your trip and the stitches were eventually removed by your own doctor.

In the wake of the accident, you had the presence of mind to photograph the door. On the outside nothing warned passengers not to stand in front of it. On the inside nothing instructed the crew that it was only to be used as an emergency exit.

But soon after the accident, signs appeared. On deck the sign warned passengers not to block what was a fire exit. On the inside a fresh sign was put up, telling crew members that the door was only to be opened in an emergency.

It is hard to see this as anything other than an open and shut case. But when your solicitor asked TUI for the name of its insurer, and suggested that if TUI did not hand over copies of its records about the accident then he would take the matter to court, the shutters came down.

When your solicitor tried to file a county court claim on your wife’s behalf, TUI told him he must go to the specialist Admiralty Court. At this point, as costs mounted, you and your wife halted legal action.

But when I invited TUI to comment, I was told: ‘As we understand this matter is now the subject of legal proceedings, it would be inappropriate to comment at this time.’

I told TUI repeatedly that there are no legal proceedings and I asked time and again for details of the court and case number. Eventually, TUI told me there had been ‘a degree of confusion’. When the cruise company referred to legal proceedings, all it meant was that it had heard from your solicitor.

But you no longer have a solicitor. You had to back out because he warned you of the need to pay for a specialist barrister. Your letter to The Mail on Sunday made this clear.

Sadly, TUI has proved completely unwilling to discuss the accident. It has been trying to persuade me to question your former solicitor on points of legal procedure, instead of looking into why the smoking area was set up right outside a heavy metal door, why there were no warning signs on the door and what TUI could do to help a passenger who was injured on one of its cruise ships.

Absurdly, at this late stage TUI told me that any claim could be started in the Admiralty Court and then be transferred to the far cheaper county court. So why not say this in the first place?

Even worse, at no point did TUI tell you, or me, or your solicitor about the even cheaper conciliation scheme run by the Association of British Travel Agents. A spokesman explained: ‘This conciliation scheme is a simple and cost-effective means for ABTA members and their customers to resolve personal injury claims for awards of up to £10,000 without the need to go to court.’

I have sent you details of the ABTA scheme. But TUI’s attitude throughout makes me wonder whether passengers on its ships should not just take out travel insurance. Perhaps they need legal expenses insurance as well.

How can I pay for my father’s funeral?

S.H. writes: My father was seriously ill and I arranged a meeting with his bank Halifax to discuss what would happen if he passed away. I was particularly concerned about funeral expenses as I am not wealthy. I was assured that on his death the bank would release funds from his account to pay the funeral bill. Sadly he passed away. But when I took the death certificate to the bank I was horrified to be told it would not release the funds because my father had a joint account with my mother, who suffers from Alzheimer’s. Luckily, I have an understanding funeral director who is willing to wait.

This has been an unusually tricky situation. Normally, banks release funeral costs without any problem and a joint account would pass to the surviving signatory, again without any problem. I can only imagine that when you first approached Halifax the person who spoke to you was speaking hypothetically. They were either unaware of your mother’s condition or assumed that there must be a power of attorney in place.

I have been over this with Halifax officials and they have been sympathetic towards you. They have a duty to be fair towards your mother, but they have also tried hard to be fair to you. With your approval Halifax has agreed to cover half the funeral costs from what was the joint account. By the time you read this, the payment will have been made.