TONY HETHERINGTON: You really DO need legal cover for a cruise on a TUI ship

Mrs S.H. writes: I contacted the Association of British Travel Agents about holiday company TUI as you advised in The Mail on Sunday on March 25 and I have now received this from the association: ‘Unfortunately, the member has advised us that they are not willing to use the conciliation scheme on this occasion’.

The association says that ‘the scheme is voluntary, so customers can only proceed if the member agrees to it’.

I am disappointed with ABTA. What is the point of a voluntary scheme and why would TUI want to engage in it if it does not have to? 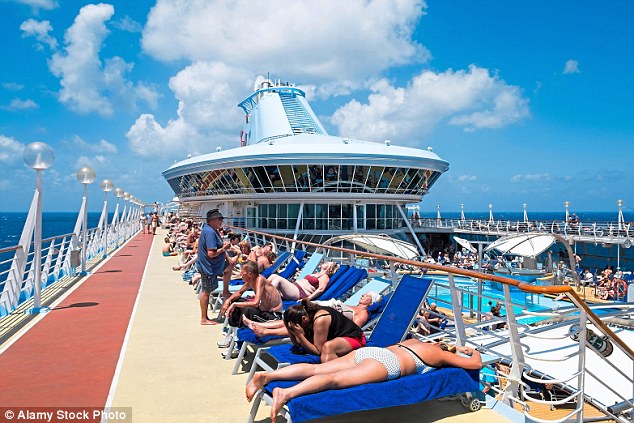 All at sea: The TUI Discovery cruise was ruined

TONY SAYS: I was stunned to hear this news. You and your husband were on a cruise on the TUI Discovery when you went for a cigarette in a signposted designated smoking area on deck. A crew member opened a heavy metal door from the inside, gashing your leg and leaving you lying bleeding and needing emergency treatment from the ship’s doctor.

He stitched the open wound but it needed cleaning and dressing every day. Your cruise was ruined. It turned out that the door was for emergencies only and the crew member had taken an unauthorised short cut. There were no warnings, inside or outside the door, until signs were hastily added in the wake of your accident.

When you returned home, your solicitor approached TUI, requested copies of its accident records and suggested you might sue in the county court. TUI’s response was to tell him you would have to claim in the specialist Admiralty Court, not the local county court. Your solicitor warned you about mounting costs, so you felt forced to back down.

The Association of British Travel Agents seemed to offer a lifeline. It runs two schemes for arbitration and conciliation in complaint cases. The conciliation scheme specifically handles personal injury claims and can award up to £10,000. 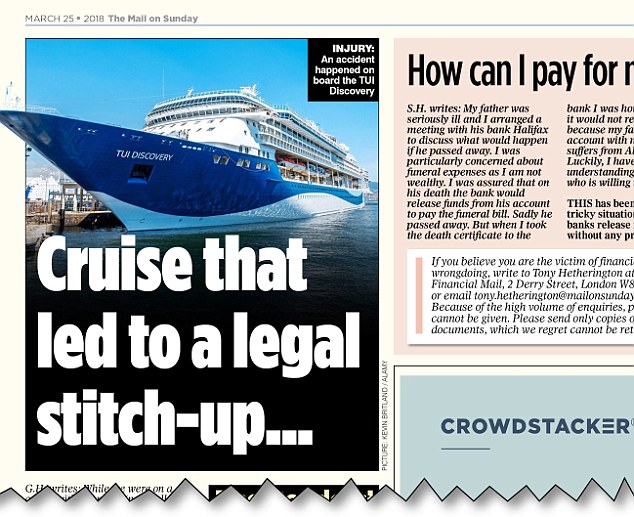 TUI told me it refused to take part because it did not accept any responsibility for your injury. But surely this is like a bank robber refusing to appear in court because he has pleaded not guilty and thinks that should be good enough. TUI says you can still sue for damages.

This giant company knows you are a 70-year-old of limited means but says it is sure you can find lawyers on a no-win, no-fee basis. Well, I told TUI you had tried this and one of the biggest law firms in this area had turned you down flat because the level of damages you might win would not earn it a big enough fee.

For the moment at least, you are stymied. You cannot afford to sue and TUI has the power to block any claim through ABTA. If a no-win, no-fee law firm is interested, please feel free to contact me.

When we published an account of your injury in March and TUI’s response, I suggested that passengers on its ships should take out both travel insurance and a legal expenses policy. At the time, I only half meant it. Now I am completely serious. One reader said her daughter was charged £199 by Santander for an inadvertent debt of £23, made up entirely of bank charges

K.J. writes: I am writing following your coverage of Santander’s excessive overdraft charges. My daughter was charged £199 for an inadvertent debt of £23, made up entirely of bank charges. Santander failed to communicate with her for more than three months, ignoring its own banking covenant. By my calculation, the result is interest at 845 per cent for a four-day overdraft. This is hardly a reasonable way to deal with a 21-year-old probationary teacher to whom Santander had offered an unsolicited £2,000 free overdraft just weeks earlier.

TONY SAYS: This is not quite as clear cut as it seems. Santander has confirmed your daughter had £11 in her account but made two card payments that meant she was overdrawn by £23. Four days later she deposited enough to put her account back into credit.

But she has an Everyday Current Account and the rules state that if you help yourself to an overdraft you will be charged £6 a day. So there was already a £24 charge in the pipeline because of the four days she was in the red.

These charges meant your daughter was overdrawn again. As she made no fresh deposits, there were new overdraft fees of £60 for one month and £95 the next month. I hoped to have a helpful word with Santander as the bank did cancel the £119 overdraft charge for the reader whose letter we published recently.

Unfortunately, this proved impossible when Santander revealed that your daughter had been in the same situation twice before.

It had already cancelled charges of £95 and £18 and had explained exactly how she could avoid a recurrence.

In July, Santander plans to cap unarranged overdraft charges on the Everyday account at £50 a month which is better but still far from ideal.

Your daughter was offered a 123 Graduate account which includes a free overdraft of up to £2,000. She turned this down – but I would urge her to think again. If she cannot keep her account in credit, at least she could sidestep daily fees of £6.