Fed-up commuters are set for another year of high price rises next January as the Government continues to link fares with the Retail Prices Index measure of inflation.

Each year, train fares are linked to the July RPI figure, which is due to be announced next Wednesday. This currently sits at 3.4 per cent with little movement forecast.

It is highly likely to stay above three per cent – and this again will be the ‘capped’ amount operators can raise regulated prices by, including annual season tickets. 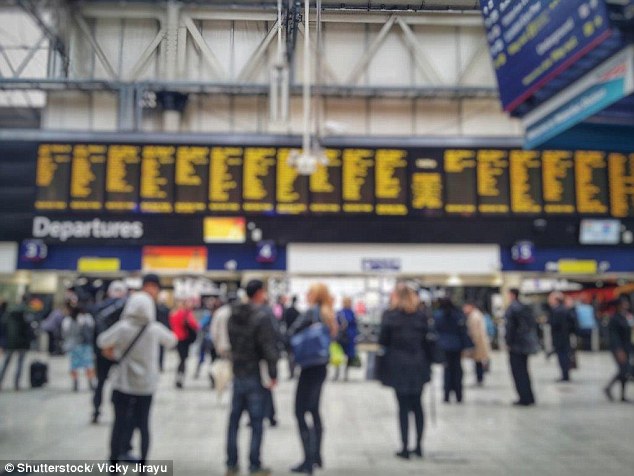 Frustration: It has been yet another year in which thousands of commuters have suffered with poor service – and prices are set to once again rise by more than 3%

However, the Office of National Statistics has used the Consumer Price Index as its preferred official measure since 2003 – RPI hasn’t had ‘national statistic’ status since 2013.

CPI is also the measure on which the Bank of England targets interest rate policy.

This is Money has tried to tried to establish why train fare rises are linked to RPI, but we have never been given a precise answer by the Department of Transport.

This January, rail fares across the board went up 3.4 per cent. This was the largest increase for five years and was slightly below the 3.6 per cent RPI figure for July 2017.

It is likely that prices will go up by a similar amount in January 2019. It will once again add hundreds of pounds to the cost of some annual tickets.

Our calculations show that prices would be around eight per cent lower if the CPI figure rather than the RPI figure had been used since 2011.

Every January, fares rise by the RPI figure from the previous January.

Here is how they’ve risen since 2011 vs July CPI

The Office for National Statistics, which produces both figures, is deeply critical of the RPI data.

Jonathan Athow, the office’s deputy national statistician for economic statistics, said last year: ‘RPI is not a good measure of inflation and we discourage its use.

‘But we do not have the authority to stop the use of the RPI or to tell particular users which index they should use in any given circumstance.’

Steve Chambers, at the Campaign For Better Transport, said: ‘The Government needs to stop using RPI.

‘The ONS stopped using it as a measure of inflation in 2013 because it consistently over-estimates. Now it’s time to apply CPI to rail fare increases.

‘Using the CPI to set rail fare increases would have little impact on railway revenues, but it would save passengers money and bring fares into line with things like pensions.’

Student loan increases are also linked to RPI, along with a string of taxes, including tobacco and alcohol duties.

Meanwhile, those who have an annual ticket from Maidenhead – Prime Minister Theresa May’s constituency – would see prices tick up £105 to nearly £3,200.

The CPI and RPI are a measure of how prices have risen. The Government’s favourite is CPI.

The CPI excludes most housing costs, such as council tax and mortgage interest payments.

According to the ONS: ‘The basic approach to the measurement of inflation adopted by both the CPI and RPI is the same.

‘Both track the changing cost of a fixed basket of goods and services over time and both are produced by combining together around 180k individual prices for over 650 representative items.’

Because they track different items and the formula is different, CPI is usually lower than RPI.