British families are enjoying cheap holidays in Turkey following a dramatic collapse in the value of the lira.

On another day of turmoil on financial markets, the Turkish currency plunged to a record low against the pound, taking its losses this year to 43 per cent.

Holidaymakers exchanging £500 at the Post Office yesterday received 4,091 lira compared with the 2,174 lira they would have got a year ago. 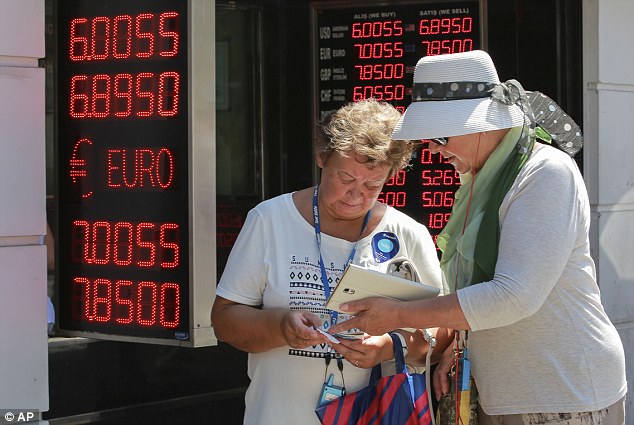 The slump in the value of the lira has led to a surge in interest from tourists heading to Istanbul, Marmaris, Bodrum and other resorts along the Turquoise Coast.

The Post Office said sales of lira in the past week were three times higher than a year ago. Andrew Brown of Post Office Travel Money said sales ‘have been rising all year as it became clear that holiday costs in resorts like Marmaris had been falling steadily as sterling surged in value’.

He added: ‘We have seen our currency sales surge by 198 per cent compared with the same time last year.’

Experts said that despite a slight rebound in the lira’s value yesterday, following support from Turkey’s central bank, further falls could follow, making holidays even cheaper. 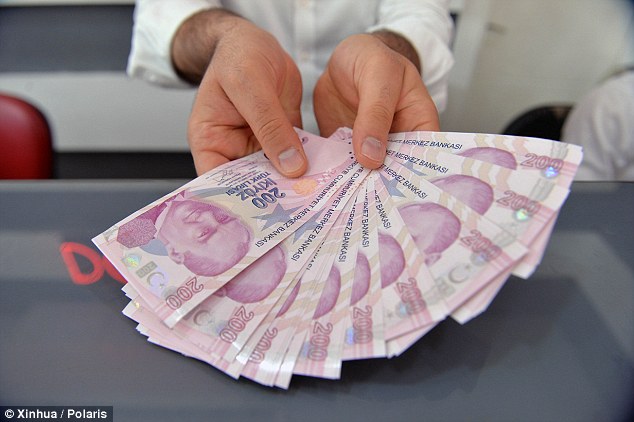 The slump in the value of the lira has led to a surge in interest from tourists heading to Istanbul, Marmaris, Bodrum and other resorts along the Turquoise Coast

The slump has taken its toll on other emerging market currencies, with the South African rand and Mexican peso also caught in the sell-off.

The lira has been hammered by worries over President Erdogan’s handling of the economy, a refusal to raise interest rates to curb rampant inflation and worsening ties with the US. 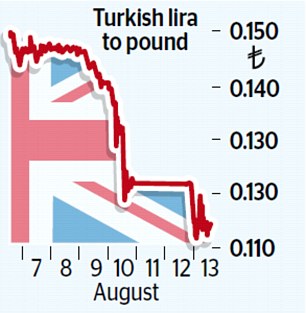 President Trump last week imposed sanctions on Turkey over its refusal to release an imprisoned US preacher.

As Turkey’s central bank attempted to shore up the financial system yesterday, Erdogan accused the US of trying to ‘stab it in the back’.

He added that ‘Turkey is under siege’.

The crisis in Turkey poses a threat to some of Europe’s biggest banks.

The European Central Bank is understood to be worried about the exposure of eurozone banks to Turkey, with Spain’s BBVA, Italy’s Unicredit and France’s BNP Paribas thought to be in the firing line.