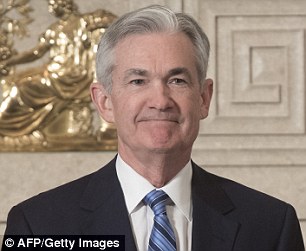 The head of America’s central bank insisted further interest rate rises were needed as he brushed off criticism from President Trump.

Just days after the president said he was ‘not thrilled’ about higher rates, Federal Reserve chairman Jerome Powell said they were needed to stop the economy overheating.

In a speech at the annual meeting of central bankers in Jackson Hole, Wyoming, Powell said the ‘gradual process’ of raising interest rates ‘remains appropriate’.

He said: ‘The economy is strong. Inflation is near our 2 per cent objective, and most people who want a job are finding one.

‘If the strong growth in income and jobs continues, further gradual increases will likely be appropriate,’ the 65-year-old bank chairman added.

Trump has complained that higher interest rates are denting his bid to stimulate the economy.