TSB boss will give up £1.6m bonus over botched IT fiasco

The chief executive of TSB today vowed to give up a £1.6million bonus following the IT fiasco which left millions locked out of their accounts – but he could still receive his annual bonus.

TSB CEO Peter Pester, who has already received a bumper bonus of £2million for the project, has now given up his ‘integration bonus’.

Customers have been left unable to access their cash, make vital payments and run their businesses properly as a result of the scandal.

The bank’s chairman Richard Meddings told the Treasury select committee: ‘He will not be taking his bonus for this integration… and I think that’s wholly appropriate’.

But he admitted bosses at the bank, including Mr Pester, could still get a bonus at the end of the year, despite the scandal.

The revelation came in the middle of a tough grilling by the bank’s bosses who were quizzed about how the long-planned IT switch-over ended in such chaos.

And he was accused of ‘extraordinary complacency’ as he claimed the botched IT switch-over initially went smoothly.

Twitter users rounded on the banking bosses, pointing out that they were still in line for their annual top-ups while their customers ‘suffer’. 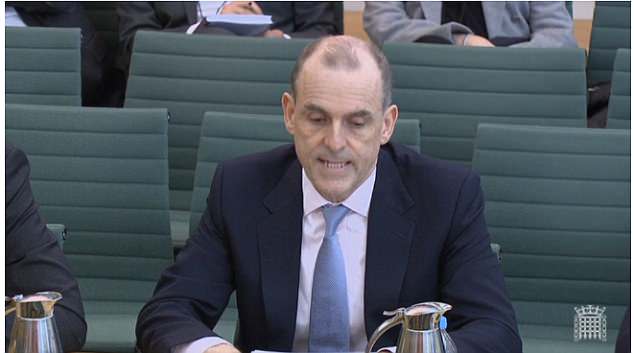 Paul Pester, TSB’s chief executive (pictured in Parliament today)  appeared to try to downplay the scandal by insisting the vast majority of customers can access their accounts. But it was also revealed that he will not get his £1.6m bonus following the fiasco 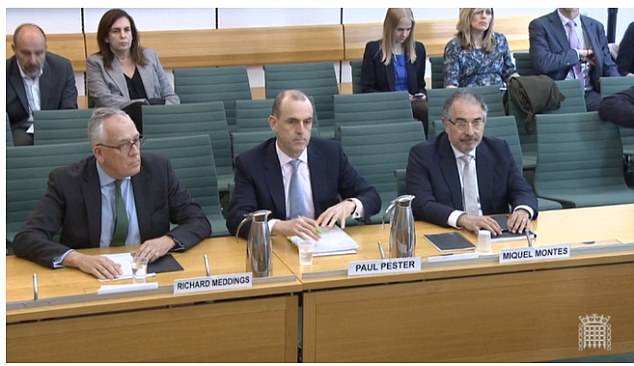 TSB chief executive Paul Pester (pictured, centre, in Parliament today next to TSB chairman Richard Meddings , L, and Miquel Montes, Chief Operating Officer, Sabadell Group, R,). The trio were grilled by the Treasury select committee on the IT failure which has wreaked havoc to TSB accounts in the past fortnight

Steven Cameron wrote on Twitter: ‘TSB why is Pester still suggesting everything is ok and back to normal.

‘Two weeks without access is unacceptable. Nobody is taking responsibility. Pester will get his bonus eventually and the rest suffer.

‘Why is nobody doing anything about this?’

But Mr Pester appeared to try to downplay the scandal by insisting the vast majority of customers can now access their accounts.

Mrs Morgan tore into him for running a ‘broken bank’ which has left customers unable to access their own cash.

How did the TSB IT fiasco unfold?

The move followed years of planning , involved 1.3billion customer records and was expected to save the bank’s owner £100m a year.

Mr Pester says the bank is ‘on its knees’ and has called in outside help to tackle the problem.

Mr Pester started by issuing a grovelling apology, but insisted the initial IT switch-over nearly a fortnight ago had initially gone well.

He also admitted the bank received 40,000 complaints over the past ten days – far higher than the 3,000 they would expect normally over that amount of time.

He said: ‘I am certainly not downplaying anything about the  issues our customers have faced since then.

‘But it is important to understand that that migration of data, which is often very very challenging, went smoothly – the bank balanced to the penny.’

He said the overall running of the bank is running ‘relatively smoothly’ and that there were only problems affecting the bank’s website and mobile apps.

But Mrs Morgan tore into the banking boss for trying to downplay the level of the fiasco – which she said was ‘unacceptable’.

She said: ‘Do you think it’s extraordinary complacent to say this migration went smoothly, when actually there are people who have been unable to have their wages to pay in, to pay bills, there are landlords waiting or rental payments.

‘People are not in their bank accounts, and you are not in control – TSB – of the online banking services nor in the branches, are you?’

And she confronted the chief executive with tales of TSB customers who have been left unable to buy their houses their families desperately need because of the IT meltdown.

She read out an email she received from one customer who said: ‘TSB is the only bank I  bank with, I have not been able to access my bank for two weeks now….I have spent 14 hours on the phone (to customer services).

‘Please do ask Mr Pester to empty his pockets…how would you manage without cash?’

But Mr Pester appeared to suggest the customer was lying and that no one would have been locked out of their accounts solidly for two weeks, telling MPs: ‘I don’t recognise what you are describing…..

Mrs Morgan hit back saying: ‘The issue is not just online its in the branches too – are you saying this person is not telling the truth?

The banking boss replied: ‘There is no group of customers that cannot access their account for two weeks.’

The Tory MP also confronted the bosses over another older TSB customer who was ill and tried to get her daughter added to her account.

Despite repeated requests to TSB, they delayed sorting the issue out and missed an appointment to visit the woman in hospital to deal with the case.

The woman, known only as Miss C who lives in the East Midlands, died in  hospital without the issue being resolved.

The Tory MP also hit the banking boss with another email from a customer who is facing the prospect of loosing the home they had pinned their hopes on buying because of the IT disaster. 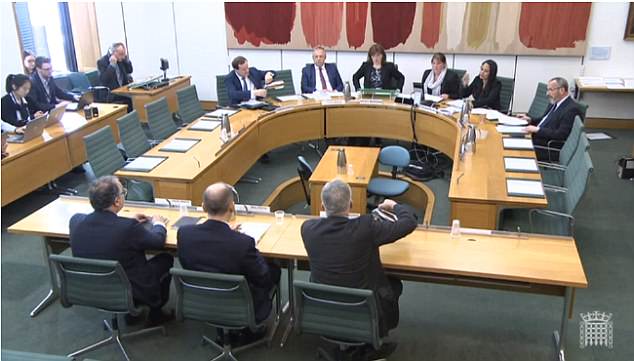 Quoting from the email, which was sent on Monday, she said:  ‘My wife and I are on a tight contract to buy a house…….the lender requested the months bank statement, we are still unable to supply them…

‘We are now facing the possibility we could miss out on buying the house our family needs.’

Mr Pester later said that he takes ‘full responsibility’ for the fiasco and that he accepts they have ‘failed’ their customers over the past ten days.

But in a fresh embarrassment for the banking bosses, Mrs Morgan revealed that two members of the committee’s own staff were trying and failing to log on to their TSB banking apps as the proceeding were going on.

She said: ‘there is no sense of urgency – even when you heard about the case of a death. It came across as pretty concerning frankly that when you heard the news of a death…it’s worrying that’s the attitude.

TSB meltdown: Locked out of your account? Unable to pay bills? Follow our guide to make the bank cough up for its almighty IT bungle

BY SARA SMYTH FOR THE DAILY MAIL

Can I claim redress if my data has been compromised?

The Information Commissioner’s Office (ICO) said on Monday it was ‘making enquiries’ about a ‘potential data breach’.

By law, if a customer suffers damage or distress because a bank breached the Data Protection Act, they are entitled to compensation. But it means taking TSB to court: time-consuming and costly.

Am I entitled to cash if I couldn’t pay bills?

You can claim compensation for losses that are incurred as a result of not being able to access your account.

TSB customer Brian Mallory, 44, says all the money had disappeared from his account yesterday and his card was declined at the supermarket.

The father-of-three, who cares for disabled wife Tina, 41, says the family, from Billingshurst, West Sussex, are running out of food and fear they will miss paying their gas bill.

Customers such as Brian should keep a record of how they’ve been left out of pocket. You will need receipts and invoices to prove you were hit with late payment charges, overdraft fees or credit card interest, for example.

If you’re unhappy with how the complaint is dealt with, then you can go to the Financial Ombudsman.

If you suffer knock-on effects, such as damage to your credit rating, ask TSB for confirmation in writing that a payment failed as a result of its error.

Send this to credit reference agencies such as Experian, Equifax and Callcredit. They should confirm in writing that any black mark is removed from your credit file.

TSB says around 400 of its five million customers saw the wrong details and that these likely belonged to people on ‘connected’ accounts — so those of other family members.

But several say they’ve seen account numbers, sort codes and transaction histories of strangers’ accounts. One customer claims he had access to more than £20,000 that wasn’t his.

TSB says it has contacted everyone involved. So, unless you hear from the bank, you can only assume that others have not seen your details.

If you log in and find someone else’s account details, take a photo of the screen, so you have a record of what you’ve seen.

Alert TSB to the mistake, but don’t show the information to anyone else. Ask for a secure address to send your evidence to and request confirmation in writing that it has notified the person whose data has been breached. You can also report this to the ICO.

By law, if cash is accidentally paid in to your account and you know it isn’t yours, you must pay it back. If you keep or spend money you know isn’t yours, you could be charged with retaining a wrongful credit under the Theft Act 1968.

Can I protect myself against identity fraud?

All TSB customers should be wary of phone calls, texts or emails that claim to come from the bank in the near future. Fraudsters pounce on this type of chaos to try to trick customers into handing over their personal details.

Just because an email appears to come from an official address or a text message appears in an ongoing text stream doesn’t mean it’s legitimate.

Don’t share any details unless you are sure it is with TSB.

Keep an eye on bank statements. Look for bounced or failed transactions and anything that has led to a charge.

If your data was compromised, ask for a new account number.

I want to switch banks: who has the top deals?

TSB customers who want to change bank may have to wait until the IT issues are resolved. It should only take a week to switch.

The Midata tool at gocompare.com/current-accounts uses data from your account to find deals that could suit you.