TSB customer finds balance is $13MILLION in the red

A TSB customer was stunned when he logged into his account and saw his balance was $13 million in the red as the bank struggles to fix major technical problems.

Nearly two million account holders are still locked out of their accounts or have wrong balances five days after a system upgrade led to disaster.

Customers are reporting seeing obscene account balances, some owing anywhere from $83,000 to $13,000,000, although their accounts are in pounds.

Issues also include being able to access other customers’ accounts, allowing them to view sensitive personal information, such as phone numbers and emails, and even transfer funds.

Outraged customers took to social media to demand answers from TSB as some locked-out account holders are unable to make bill payments or withdraw cash.

On Tuesday, CEO Paul Pester said customers wouldn’t be ‘left out of pocket’ over the chaos, adding that the online and mobile services would be taken down and hopefully be back by the afternoon. 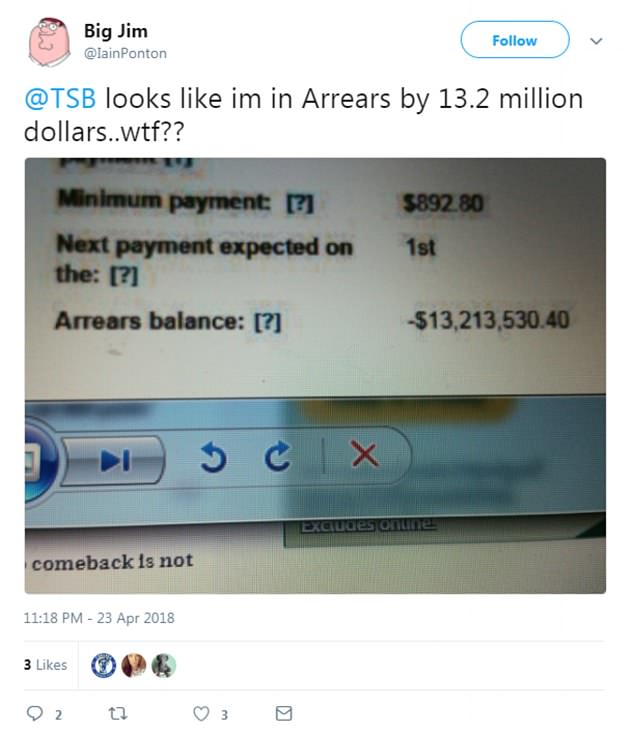 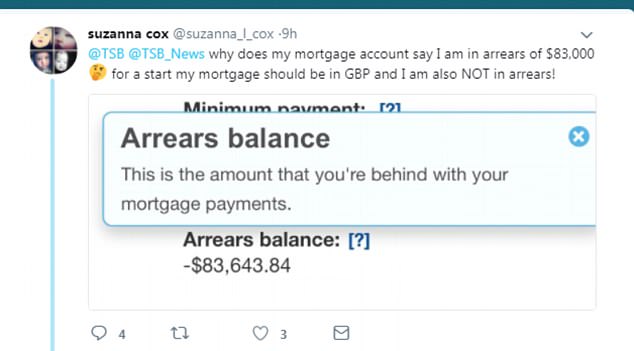 Customers are reporting logging into their accounts and seeing obscene account balances, some in the red from anywhere from $83,000 to more than $13,000,000 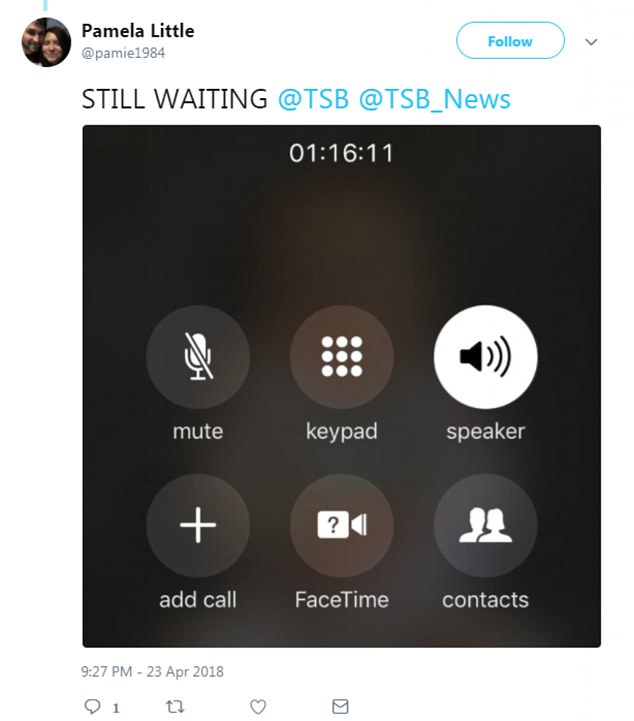 While trying to contact TSB about these issues, customers say they have been unable to get through or put on hold for hours

In a series of tweets, Petser said: ‘I’ve just resurfaced after 48 hours with my teams who have been working as hard and fast as they can to get our services back up and running.

‘This isn’t the level of service that we pride ourselves on providing, and isn’t what our customers have come to expect from TSB, and for that I’m deeply sorry.

‘We’re still seeing issues with access to our digital services. One of the steps we need to take to resolve this is to take our mobile app and online banking down for a few hours.

‘We’ll be taking this offline and we hope to be back up later this afternoon. We’ll let you know as soon as it’s available again.

‘Of course, customers can rest assured that no one will be left out of pocket as a result of these service issues.’

According to Sky News, the bank said 402 customers were able to view ‘some data that we would not normally not show them online’ for 20 minutes on Sunday.

Mail Online has reached out to TSB for comment. 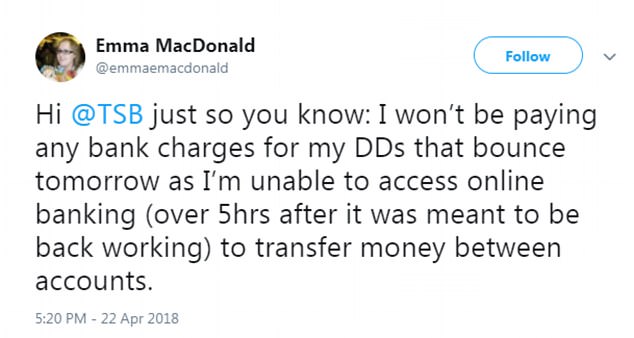 Meanwhile, some customers said their balances showed they were given far more money than what they should have in their accounts – as much as £13,000.

Others have been locked out of their accounts for days, making them unable to pay bills or withdraw cash from machines.

While trying to contact TSB about these issues, customers say they have been unable to get through or put on hold for hours.

Customer Matthew Neal told the BBC he was shocked when he logged into his account when trying to see how much he spent at the pub the previous night to find he had access to a stranger’s account.

Neal said: ‘I could see all my accounts, but on top of that also three accounts belonging to someone else: a £35,000 savings account, an £11,000 Isa and a business account.

‘I could see their account numbers, sort codes and transaction histories and I had access to transfer money too, if I was that way inclined.

‘The thing that was worrying me most was: what if someone can see mine too?’ 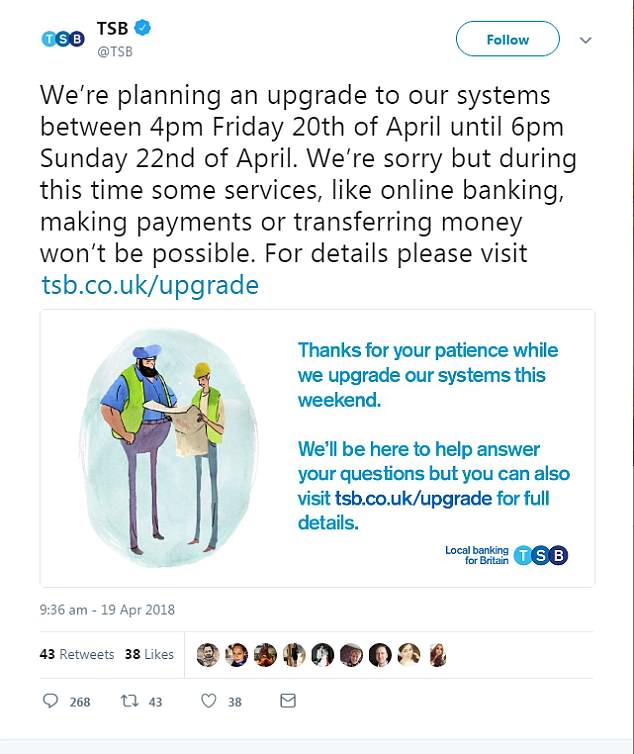 Another customer said they had ‘access’ to an account totalling more than £20,000 and another reportedly discovered they had been credited with £13,000 after logging back in.

A number of customers are still unable to access their money.

The bank has apologised and told its account holders that some of its services, including online banking, making payments or transferring money, would not be possible over the weekend.

Philip Augar, a former TSB board member, criticised the bank’s response to the crisis, saying on the BBC’s Wake up to Money: ‘If this sort of thing happens, ‘fess up straight away, be honest and play it straight from the word go and that seems to have gone wrong.’

The upgrade window was scheduled between Friday at 4pm and Sunday at 6pm.

However a message on the TSB website said there were still ‘intermittent issues’ with its mobile and internet banking services.

The bank said it was ‘working as hard and as fast as we can to get these up and running’.

TSB’s social media team faced a stream of complaints from customers, including several who said they could see other people’s accounts after logging back in on Sunday evening.

Craig Malcom tweeted: ‘@TSB I currently have access to £20k+ of other peoples money.

‘I suggest somebody answers the phones as iv been on hold for 45 minuets!

‘This is a MASSIVE breach of data protection! If i have access to their account they could have to mine as well!’ TSB’s social media team faced a stream of complaints from customers, including several who said they could see other people’s accounts after logging back in on Sunday evening

Another Twitter user called Bex said: ‘@TSB so go to my app and have someone else’s accounts there!!!! Serious dpa (Data Protection Act) breach!

‘Want to speak to someone now and a half an hour wait!! What would the FCA (Financial Conduct Authority) say about this!!! Might just inform them a bank is giving away other people’s account numbers’.

Laim McKenzie, from Paisley in Scotland, told the BBC he had been unexpectedly credited with thousands of pounds after logging back in after 6pm on Sunday.

WHAT TO KNOW IF YOU BANK WITH TSB

What are your rights if payments are messed up?

Bank customers who suffer knock-on costs during a meltdown like this are usually reimbursed by the bank.

For example, when the NatWest/RBS IT fiasco happened in 2012, it announced shortly afterwards that nobody would be left out of pocket. It was eventually fined £56million.

It is wise to make a note of dates and a log of how much you have been left out of pocket. It isn’t clear yet how widespread the problems are with TSB.

Furthermore, the bank may have a data protection crisis on its hands – and this could potentially see customers compensated and the bank facing hefty fines.

You can start the ball rolling with an official complaint by heading to its website.

If you spend money in your account that isn’t yours

One customer said they had ‘access’ to other customers’ accounts totalling more than £20,000, while others appear to have received payments directly into their accounts that aren’t theirs.

Legally, if a sum of cash is accidentally paid into your account and you know it isn’t yours, you are liable to pay it back.

Keeping and spending money wrongly placed into your account could lead to you being charged with retaining wrongful credit under the Theft Act 1968.

Two sisters were sent to prison in 2008 after going on a spending spree with cash that wasn’t theirs. The then Abbey Bank had wrongly credited £135,000 into one of their accounts.

It took the bank two weeks to spot the mistake.

The official advice is to contact the bank and alert it to the mistake – but many TSB customers say that call waiting times are currently extremely long as it battles the meltdown.