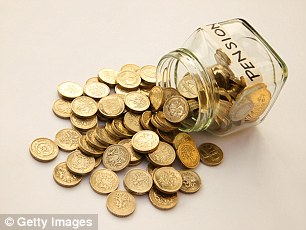 Thousands of people who regularly withdraw sums from their pensions could run out of cash in old age, a report warns.

Insurer Zurich found two in five retirees have not adjusted the amount they take from nest eggs in line with dips in the stock market, and may end up with an empty pot.

MPs on the Work and Pensions Select Committee want the Government to introduce a 0.75 per cent cap on drawdown charges levied by insurers on customers rolled over into a default fund.

They fear many are paying eye-watering amounts.

A Money Mail probe last year found savers who withdrew cash from their pensions risked £13,500 being gobbled up by expensive funds over their retirement.

Six in ten who treat funds like cash machines are rolled on to their provider’s deal rather than shopping around, according to the City watchdog.