UK’s new car sales set to be ‘the worst in Europe’ as weak pound drives fall of 5.5%

Car sales in Britain are predicted to be the worst in Europe this year as a consumer squeeze weighs on spending decisions.

The number of new cars being sold in the UK is expected to drop by 5.5 per cent, in sharp contrast with booming sales in every other country in Western Europe.

The figures are revealed in a report by financial analysts at New York-based credit agency Moody’s which concludes that the other countries are expected to get a welcome economic lift from ‘improving global economic prospects’. 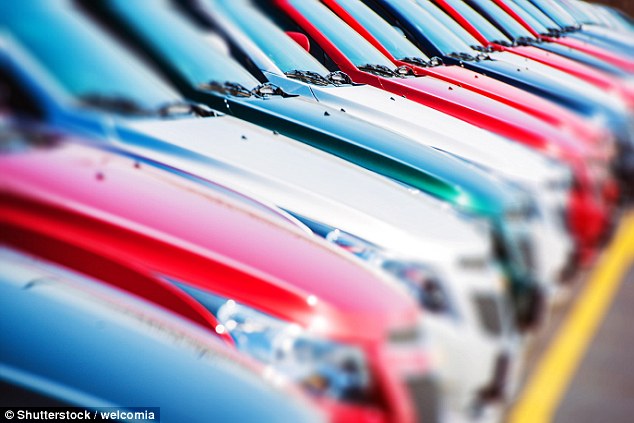 The boom is expected to be driven by Germany and Spain, where sales are predicted to rise by 4 per cent and 4.7 per cent respectively this year.

Moody’s said it had revised its growth forecasts to suit the rosier outlook since the beginning of the year.

Matthias Hellstern, corporate finance managing director for Moody’s manufacturing division, told The Mail on Sunday: ‘Everywhere else is growing and the UK is the only market in Europe where it’s declining.’

He said car sales in France – which his firm had previously expected to be static for 2018 – were now forecast to rise by 2.8 per cent. Sales in Italy are predicted to increase by 2.5 per cent.

Britain peaked at 2.7million in 2016, but purchases dropped last year. Moody’s calculates that the two-year decline in Britain will exceed 10 per cent.

Hellstern said the falling value of the pound since the Brexit referendum in June 2016 may have caused British buyers to think twice about new car purchases. 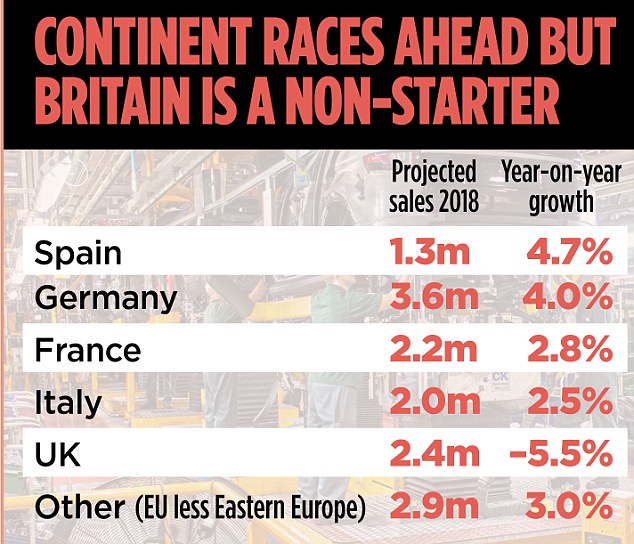 ‘We think the price of imported cars might have gone up because of the weak pound, which has an effect on demand,’ he said.

‘But there is also the uncertainty with regard to Brexit which holds people back from buying new cars.’

Fathom’s UK economist, Joanna Davies, said: ‘We continue to believe that the risk of a consumer-led recession is high, with uncertainty about the Brexit process threatening a sharp increase in precautionary saving from abnormally low levels.’

A Treasury survey of UK forecasters shows an average prediction of 1.5 per cent GDP growth this year, with Britain lagging behind other major economies. Of the G7 economies, only Japan is expected to see weaker growth, forecasts suggest. 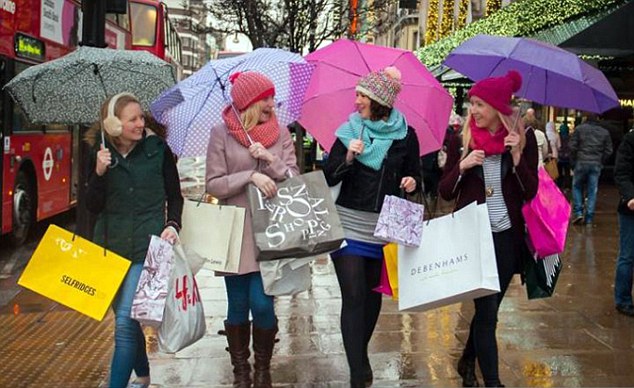 UK house prices fell unexpectedly last month for the first time in six months as homeowners braced themselves for interest rate rises later this year. The drop was also blamed on a squeeze on incomes and weaker economic growth.

Retail sales have been sluggish and economists have warned that there is unlikely to be a strong recovery anytime soon.

Wages in the three months to January rose 2.8 per cent – finally catching up with the high inflation that has been a result of the fall in the value of the pound.