The water giant set to impose a hosepipe ban on seven million customers is poised to lavish shareholders with a dividend payment of more than £180 million, The Mail on Sunday can reveal.

United Utilities will hand out the bumper cash payment on August 3 – just two days before the use of garden hoses is outlawed in the North West of England. Most of the money will be given to big City institutions.

The news is bound to enrage customers who will face fines of up to £1,000 if they dare to use hosepipes or sprinklers during the heatwave. 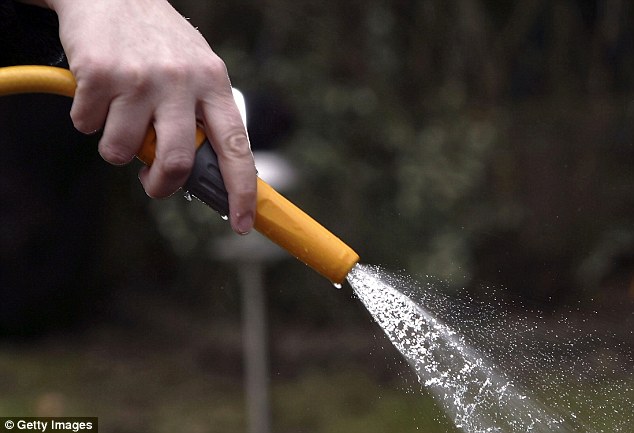 Outlawed: United Utilities is set to impose a hosepipe ban on seven million customers in the North West of England

Water companies have come under fire for putting shareholders above customers by paying out too much in dividends and not investing enough to reduce leakages, which could avoid the need for hosepipe bans in the first place.

United Utilities – headed by chief executive Steve Mogford – hopes the hosepipe ban will save 22 million gallons of water daily. However, more than four times that volume is lost to leaks each day in the area covered by the company, figures from water regulator Ofwat show.

Professor David Hall, a water industry expert at the University of Greenwich, said water companies should pay out less in dividends and instead use the money to cut leaks by improving their infrastructure. ‘The money is available,’ he said. ‘But it’s not reaching the right places – which are the leaks. It’s reaching the wrong places – which are the pockets of shareholders.’

He added: ‘Every water company in the world should be planning its resources so as to be able to cope with the worst scenarios. And the water companies clearly haven’t been doing that. It’s been a month of hot weather, but it’s following a wet winter and spring. This isn’t really extreme circumstances.’ 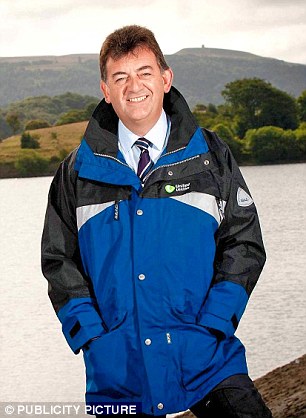 United’s upcoming dividend payment is the single biggest payday in a decade for shareholders of the FTSE 100 firm, which has dished out more than £1 billion to investors in the last four years alone.

The company’s largest shareholders include US financial giant BlackRock along with global asset management firm Lazard. Both will rake in more than £12 million.

On Friday, rival Severn Trent paid out a £123 million dividend, while South West Water’s owner Pennon is set to funnel £112 million to shareholders in September. Thames Water last month announced it would halt bonuses to bosses this year and suspend dividend payments to its shareholders, which include a Canadian pension fund and the sovereign wealth funds of China, Kuwait and Abu Dhabi. The decision followed criticism from Ofwat, which forced Thames to repay £15 to each customer over the next two years for failing to tackle leaks. In February, United announced it had recruited a spaniel called Snipe who has been trained to sniff out leaks.

Labour leader Jeremy Corbyn has been a critic of the water firms and the party’s manifesto last year called for renationalisation.

Environment Secretary Michael Gove attacked water companies earlier this year for paying little or no corporation tax. He said: ‘Ten years of shareholders getting millions, the chief executive getting hundreds of thousands and the public purse getting nothing.’ 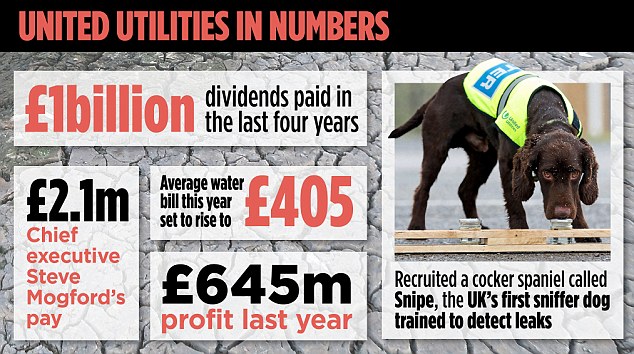 His criticism prompted Ofwat to launch a consultation on how water companies could share more profits with customers. Rachel Fletcher, Ofwat’s chief executive, said companies need to ‘make sure they’ve met their obligations to customers before making dividend payments’.

Last month, Ofwat called for ‘clear improvements’ in how they plan for droughts.

United Utilities said its total dividend of 39.73p a share is in line with a ‘five-year growth policy’ of payouts that rise in line with retail price inflation. It added that in the five years to 2020 it is investing more than £3.5 billion in ‘essential infrastructure’.