I am a single mum caring for one child, working 29 hours per week and earning £250 net wage per week.

I am working under an umbrella company on a temporary contract for six months and this is my first job this tax year since being made redundant at the end of the last tax year.

I started the job at the end of November 2017 and started my universal credit application with effect on 3 January 2018.

Due to the fact that my wage for both December and January hit my bank account in January (and also hit HMRC) I am not entitled to universal credits in January. 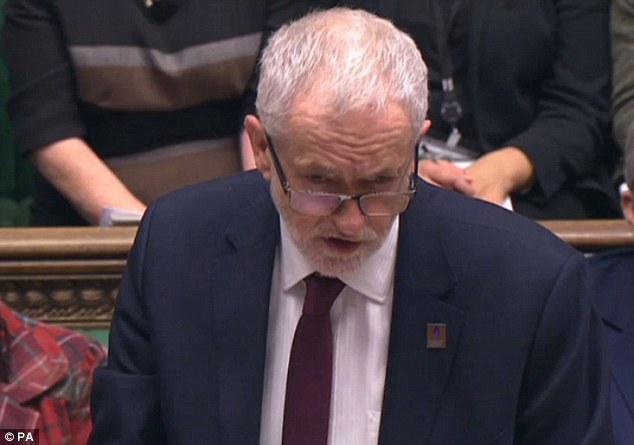 ‘Shambles’: Opposition leader Jeremy Corbyn has called universal credit a shambles during this month’s vote to stall the scheme’s roll-out across the country

So I would receive full universal credits for the two months I’m not submitting time sheets.

The third month I wouldn’t be eligible for any universal credits due to the large wage.

How can payment frequency result in eligibility criteria to claim a benefit? Via e-mail

Sarah Davidson, of This is Money, replies: Your situation is likely to be common as anyone working on temporary contracts could find themselves in this situation.

It makes budgeting much harder if one month you are eligible to receive a universal credit payment and the next you don’t qualify or receive much less.

In your case, you have discovered that you are missing out due to a change in employment. This feels unfair.

But the Department of Work and Pensions explained that some people may manipulate the system to use this to their advantage. By arranging to only be paid every three months, they could pick up two months of universal credit payment as long as they were willing to forgo it in the third.

That doesn’t seem fair either – and the rules are due to change to prevent it in April.

Universal credit was intended to transform a bloated benefits system but it has been beset with problems.

The Department of Work and Pensions, which administers payments, has suffered delays to its roll-out and been chastised over the length of time it takes for claimants to receive the benefit – leaving many unable to pay their rent and facing eviction.

Labour politicians have been calling for the Government to reconsider the scheme, but in spite of a successful vote to stall its roll-out in the Commons earlier this month, the Government has shown no signs of abandoning its transition to the new system.

They have, however, acknowledged several problems with universal credit and are making some amendments to the law in the coming weeks.

As it stands, the rules for universal credit are complicated and vary depending on your circumstances, the number of children you have, when they were born and whether you claim housing benefit.

To illustrate your predicament, we worked through your entitlement.

Provided you are over the age of 25, your child was born before 6 April 2017 and you do not claim help for the cost of your housing, you would be eligible for a monthly universal credit payment of £594.90.

You have a working allowance of £397 income a month on the same basis, which means you can earn up to this amount each month and still claim the full universal credit payment. Your income could therefore be £991.90 a month.

For every pound you earn over this £397 threshold, the Government deducts 63p from your universal credit entitlement.

In a normal month, you would have a net income of £1,083.33. Therefore you would be entitled to a reduced universal credit payment of £162.51 in addition to your earned income.

If both your paychecks arrived in one month, this would mean you earned £2,166.67 in January.

As a result, your monthly universal credit allowance would drop to zero because of the deductions.

Over a six month period, if you were to do as you say and get paid in two separate three monthly installments you would earn a total of £8,879.60 through your salary and universal credit payments.

If you were to get paid monthly and apply for universal credit monthly however, you would only receive £7,457.06 – a full £1,404.54 less for playing by the rules and not gaming the system.

Currently, there’s nothing to stop you from claiming the higher amount of universal credit by bunching your paychecks like this, but the Government is wise to this loophole and is due to pass a new law preventing it this April.

We asked the Department for Work and Pensions to look at your situation.

It said: ‘Universal credit adjusts automatically to people’s earnings so they have a guaranteed stable monthly income and can keep more of what they earn.

‘From April we are introducing new rules which will prevent people – in rare instances – from manipulating the system.’

They added that the regulations which come into effect in April should ensure that those with fluctuating earning patterns are not unduly penalised or unfairly rewarded under universal credit in comparison to those being paid regular amounts monthly.

The brainchild of the Conservatives back in 2010, universal credit is a single monthly benefit payment that rolls six weekly benefits into one.

It is paid on a monthly basis, and has been widely criticised due to problems with its staged roll-out across the country as well as payment delays causing social tenants to fall behind on their rent.

The latest figures from the Government should the number of people on universal credit rose to 730,000 in January 2018.

1.8million claims have been made for universal credit up to 11 January 2018.