The owner of Universal Studios is preparing an all-cash takeover offer to top Disney’s £39billion bid for the entertainment assets of 21st Century Fox.

Comcast has amassed a £45billion war chest for a takeover battle that will set the stage for a major showdown with Disney, which agreed to buy most of Fox in December. 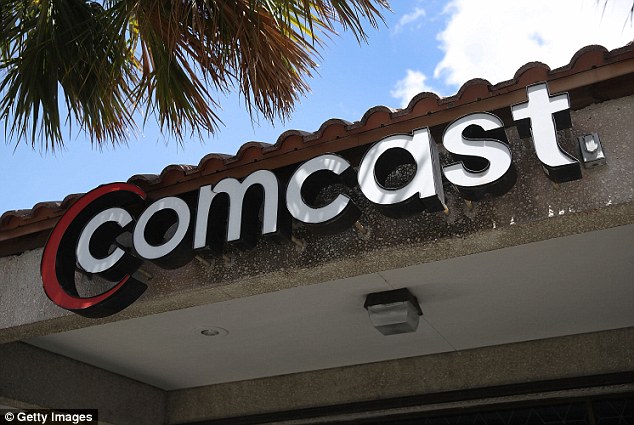 Comcast has amassed a £45billion war chest for a takeover battle that will set the stage for a major showdown with Disney, which agreed to buy most of Fox in December

Fox chairman Rupert Murdoch and Disney chairman Bob Iger have both said it would give the merged company more firepower to take on technology giants such as Netflix and Amazon.

But now Comcast is hoping to prise them apart, with the company saying it is prepared to offer at least as much as its rival.

‘Any offer for Fox would be all-cash and at a premium to the value of the current all-share offer from Disney’, it said yesterday.

The potential takeover, like Disney’s offer, does not include the Fox News Channel, Fox Business Network, Fox Broadcasting Company and certain other assets, which would be spun off into a ‘New Fox’ company.

Comcast’s move is the latest twist in what has become a transatlantic chess game with Disney. It was originally in the running to buy Fox last year but Murdoch shunned the offer, which was made in shares.

The takeover of Sky has become one of the City’s most complicated in recent years.

It began when Rupert Murdoch’s 21st Century Fox made an £11.7billion offer for the 61pc of Sky that it didn’t own in December 2016.

That got bogged down in concerns over Murdoch owning too many media outlets.

Then, in December last year, Disney offered to buy the entertainment assets of 21st Century Fox, which would include Sky, for £39billion.

Now Comcast plans its own all-cash offer for Fox of £45billion, to trump Disney.

This was reportedly due to fears it would not win regulatory approval and because the Murdoch family, which controls Fox, preferred Disney shares.

Just months later, however, Comcast put a spanner in the works by derailing Fox’s planned takeover of Sky in the UK.

Murdoch’s firm has been trying to get its £11.7billion bid for the British broadcaster through since December 2016 but last month Comcast swooped in with an offer of £22billion.

That complicated Fox’s deal with Disney, which included Sky – an asset described by Iger as a ‘crown jewel’.

Rumours had been swirling for months that Comcast’s offer for Sky was a prelude to a fresh bid for Fox but until now bosses had denied it.

Yesterday’s statement was the first formal confirmation by the company it was ready to pounce.

A ruling on the case, seen as similar in structure to Comcast’s potential takeover of Fox, is due next month.

Comcast, though not well-known in the UK, is the owner of NBC and Universal Pictures. It is a formidable rival for Disney, although chairman Roberts has struggled to convince investors to support his takeover plans.

Comcast shares have fallen by more than 17 per cent since it made a bid for Sky and were down again last night.

But Jeffrey Logsdon, an analyst with JBL Advisors in California, said: ‘Comcast does seem intent on winning this one, and rivalry can frequently drive prices to un-economic levels.’