Unmarried widows and widowers are a step closer to becoming entitled to bereavement benefits that are currently available only to those who are married after a landmark legal case today.

She had been refused the benefit on the basis that she had not been married to her partner of 23 years, John Adams, who died from cancer in January 2014. 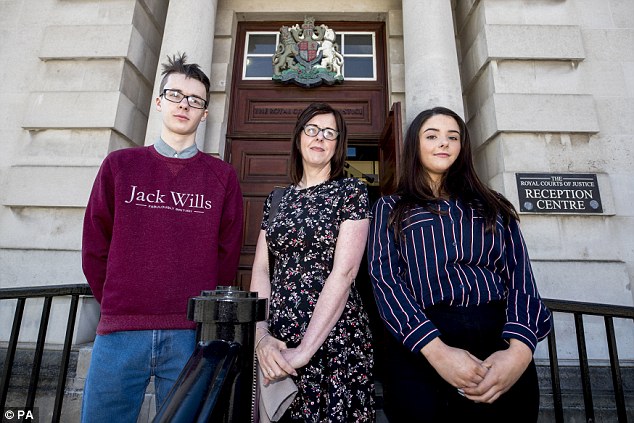 Victory: Siobhan McLaughlin is pictured today with her children Billy and Rebecca Adams

McLaughlin had previously successfully challenged the decision in the High Court in Belfast but a government challenge to that ruling was later upheld in the Court of Appeal.

However, today’s landmark judgement gives her access to the bereavement benefits.

This could pave the way for more cohabiting parents to become able to claim such benefits which, by law, are only available to married widows and widowers.

Bereavement benefits have been dramatically overhauled over the past year, but despite their ‘modernisation’, they are still not available to unmarried couples, even those with young children.

There are three payments available to the partners of those who pass away at a young age; a bereavement support payment, a widowed parent’s allowance and a bereavement allowance.

They are paid for from the National Insurance contributions of the person who has passed away.

The deceased may have paid tens of thousands of pounds in National Insurance contributions, which goes towards qualifying for a pension in old age.

If they die, some of that money is given to their children or partner instead when they are likely to need it most.

The payments help widows bringing up children with a sudden drop in family income, or help families to find the money needed for a funeral and other immediate costs after a loved one passes away.

Although these benefits are not currently available to unmarried couples, today the Supreme Court, by a majority of four justices to one, ruled that the current law on the allowance is ‘incompatible’ with Human Rights legislation.

Giving the lead judgment, the court’s President Lady Hale said: ‘The allowance exists because of the responsibilities of the deceased and the survivor towards their children.

‘Those responsibilities are the same whether or not they are married to or in a civil partnership with one another.

‘The purpose of the allowance is to diminish the financial loss caused to families with children by the death of a parent.

‘That loss is the same whether or not the parents are married or in a civil partnership with one another.’ 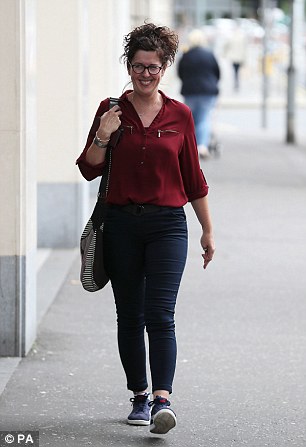 However, Lady Hale said not every case where an unmarried parent is denied the allowance after the death of their partner will be unlawful. The court also said it is up to the Government to decide whether or how to change the law.

Rachael Griffin tax and financial planning expert at Quilter said high profile court cases around cohabitation are becoming an increasing occurrence, and not a trend that ‘the government should be applauding’.

‘This most recent case serves as a stark reminder that marriage is heavily engrained in our current benefit and tax systems. This structure, however, does not marry to current trends. Recent ONS figures highlight there are nearly 6million cohabitees in the UK,’ she said.

‘This is a worrying state of affairs and one that merits serious examination by the government. Judgements like these increase the pressure on the government to carefully look inheritance and tax rights to ensure they reflect modern family units.’

‘Whilst the position of unmarried partners is still precarious, the rights afforded by this decision are certainly an improvement. It will allow people in the UK to apply for the widowed partner’s allowance.

‘Modern family structures are constantly evolving, and married couples are no longer “the norm”. Despite this, the law in this country lags far behind and it is cases like this which demonstrate the need for widespread reform.’