Defence giant BAE Systems has struck a deal worth up to £1billion to sell amphibious tanks to the US Marines. 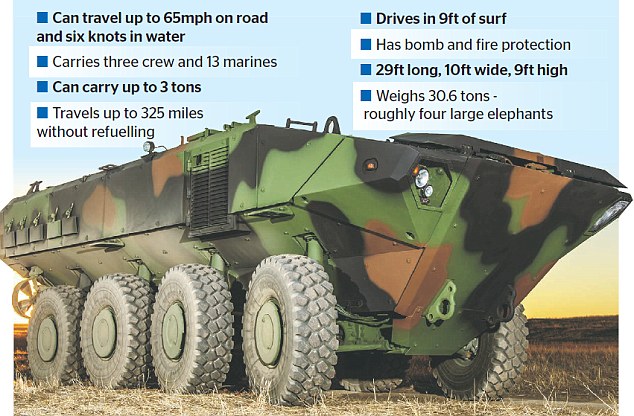 Maintenance of all vehicles could be worth around £4.7billion over their lifetime, the US Department of Defence estimated.

British defence firms have been expecting to benefit from a boost in US defence spending under President Donald Trump.

The contract is a boost to BAE after it announced plans to cut almost 2,000 UK jobs in aerospace and maritime last year amid a slump in orders.

The tank the US Marines are buying will replace models dating back to the Vietnam era.

They can each carry three crew and 13 Marines – and can run through nine-foot waves. Work on building the tanks will now take place at BAE’s plants in the US.

BAE boss Charles Woodburn welcomed the contract and said its US business is expected to double production of combat vehicles in the next three years.

Dean Medland, from BAE’s tanks division, said: ‘We are proud to continue our partnership with the Marine Corps.’