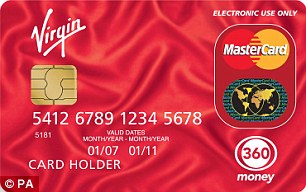 Virgin Money has taken a £7.8million hit after admitting it was over-optimistic about zero-interest credit card deals.

Accountants assumed most cardholders would stay after this initial discount ended, but instead many more than expected quit.

That meant Virgin missed out on money it had expected to earn from them in interest – cash it had already booked as profit.

It follows months of speculation about the health of Virgin’s £3.1billion credit card business.