The chief executive of Vodafone has used one of his final public appearances to fire a warning shot over Brexit, as he revealed plans to quit after a decade at the helm.

Vittorio Colao said that ‘we need to get Brexit right’ and that Britain was at risk of losing out to other European countries as a base for technological innovation.

Speaking at the end of a press conference last week, he said the UK has a ‘tremendous opportunity’ from its ‘academic and intellectual power’ and ‘was on the right track creating technology hubs’. 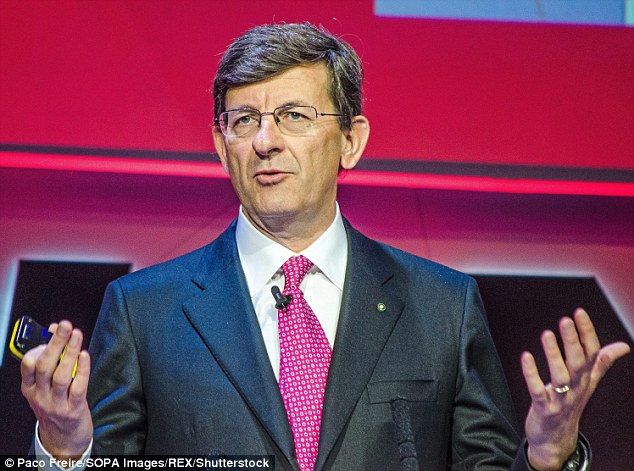 Off-script: Vodafone chief executive Vittorio Colao is quitting after a decade at the helm

But the Italian boss added: ‘If we get GDPR [General Data Protection Regulation] and data treatment wrong, if we get the visas wrong, the immigration part, this country misses an opportunity.’

Asked what he thought the next ten years had in store for his industry, Colao warned his corporate advisers he was going ‘completely off-script’.

He said Vodafone has no plans to move its headquarters to Germany, but would have to build more innovation centres in Germany as ‘that’s where we have our main assets’.

‘Does the UK have the opportunity to compete for that? I think it does. But we need to get this Brexit thing right. Otherwise Lisbon, Berlin, the Finns, Amsterdam will become very appealing places as well,’ he said.

Colao has previously aired his preference for the UK to remain in the EU, but the fact he spoke out on a personal level before his departure signalled his depth of feeling on the topic.

He hands over the reins in October to Nick Read, who has been chief financial officer at Vodafone for four years.