The boss of scandal-hit Volkswagen has been given a major motor industry award for achieving record sales of VW cars despite global controversy over the dieselgate emissions row.

German car boss Dr Herbert Diess, newly appointed chief executive of the Volkswagen Group after nearly three years running its VW cars division, was handed a gong for his impact on Volkswagen’s success over the past 12 months in delivering a record year for sales.

The award presented by Autocar – the world’s longest running motoring magazine – was given to the person it believed had ‘made the biggest impact on their company’s success over the past year’. 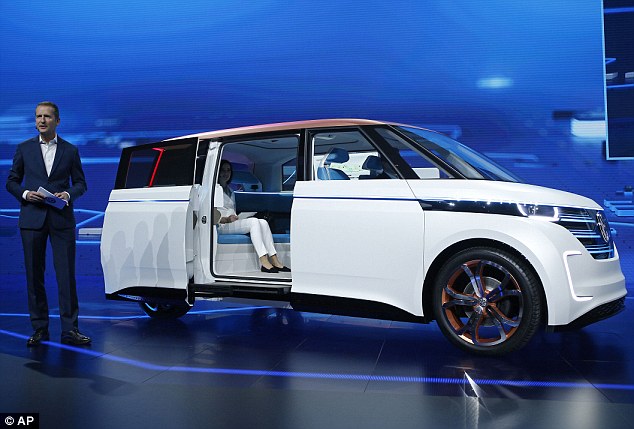 Award winner: Newly-appointed Volkswagen AG CEO Dr Herbert Diess was handed an Autocar Award for his impact on car maker’s success over the past 12 months in delivering a record year for sales

It comes just days after reports that Dr Diess travelled to the United States to testify to authorities there about the car-maker’s emissions cheating scandal.

Germany’s Bild newspaper said he spoke with representatives of the US Justice Department and the FBI.

Industry experts have marvelled at how sales at Volkswagen – the world’s biggest car maker – have actually accelerated in the wake of the scandal which appears not to have dented the popularity of its vehicles in the two years since it erupted.

Volkswagen Group, which also includes Porsche, Skoda, Audi and SEAT, sold a record 10.7million vehicles in 2017 – up 4.3 per cent on the previous year.

The Autocar award to Dr Diess was one of a series made during a special ceremony attended by motor industry bosses at a glitzy event held at Silverstone racing circuit.

In April this year Austrian-born Diess, 60, was named as the new chief executive for the entire Volkswagen Group which also includes luxury brands Lamborghini, Bugatti and Britain’s Bentley. 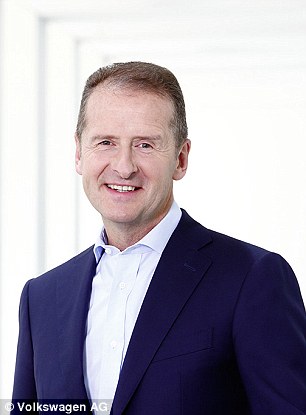 Dr Diess had previously been head of Volkswagen’s car division, having joined the VW group from BMW in July 2015

Dr Diess had previously been head of Volkswagen’s car division, having joined the VW group from BMW in July 2015, just two months before the dieselgate scandal broke in September 2015.

Autocar said: ‘The Editor’s Award went to Herbert Diess, chief executive of the Volkswagen Group, for his impact in his previous role on Volkswagen’s success over the past year, delivering a record year for sales in 2017.’

He in turn had been appointed to replace Martin Winterkorn, 70, who resigned from the top job five days after the scale of VW’s deception over emissions became clear.

Earlier this month Winterkorn was charged by US prosecutors in Detroit who issued an arrest warrant against him for allegedly conspiring to mislead regulators over its efforts to cheat the emissions tests of its diesel vehicles – the ninth person to be prosecuted in relation to the scandal. 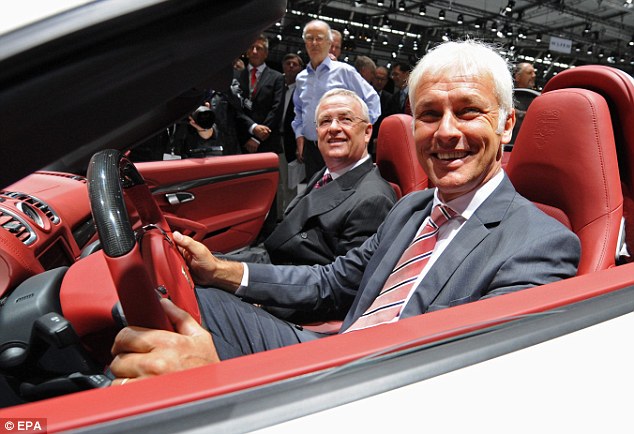 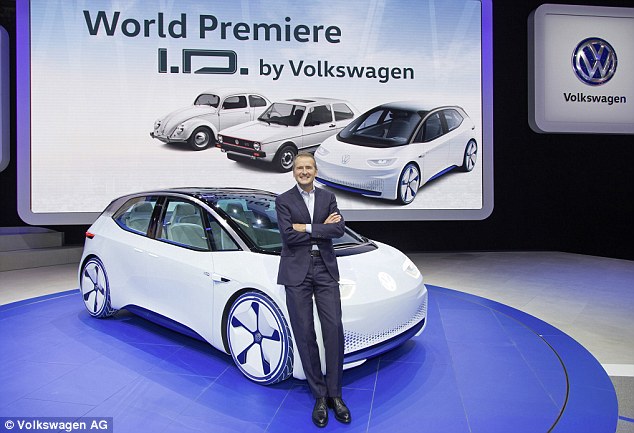 Two who pleaded guilty are serving time in prison.

In March 2017 Volkswagen pleaded guilty to criminal charges that it deceived US regulators by installing so-called ‘cheat devices’ to make its diesel cars appear cleaner than they really were.

At the heart of the scandal is Volkswagen’s falsification of emissions data on its diesel vehicles which made them appear cleaner than they are.

The deception was exposed by researchers in the US and sparked a world-wide scandal.

Some 11 million cars worldwide including VWs, Audis , SEAT and Skoda cars – were fitted with the software including 1.2 million in the UK.

It has led to law suits in the USA where senior VW executive Oliver Schmidt was sentenced to seven years’ imprisonment for evading US clean-air laws, and where VW has spent nearly £30million in criminal damages and compensating US drivers.

However VW in the UK Volkswagen has not admitted wrong-doing and is resisting claims for compensation as consumers prepare a ‘class action’ claim.

After studying automotive engineering in Munich and a spell with Bosch in Stuttgart, Dr Diess joined BMW in 1996 and rose swiftly through the ranks.

He was responsible for running the then BMW-owned Longbridge plant in Birmingham and the retained Oxford factory from 2000 to 2003 for the launch of the new MINI hatchback in 2001.

He joined the BMW board in 2007 where he gained a reputation as a cost killer before his move to Volkswagen was announced in December 2014 ahead of his arrival in July 2015.

Who else won at the Autocar awards?

• Toyota Motors president Akio Toyoda was awarded the top Issigonis Trophy – named after the creator of the legendary Mini Sir Alex Issigonis – in recognition of his ‘inspiring leadership of the Toyota brand and for pioneering new technology in the industry’ and for his contribution ‘to the health, excellence and competitiveness of the European motor industry’.

• Briton Ian Robertson, was awarded Autocar’s first Lifetime Achievement award to honour his 39-year career from apprentice at Austin Morris to the main board of the BMW Group to become ‘the most high-profile Brit in the global automotive industry’.

• Engineer David Twohig won the Mundy Award for his work leading the development of Renault’s newly reborn Alpine A110 sports car which, along with the Rolls-Royce Phantom, were also the only two cars of the past year to receive a maximum ‘five-star’ rating from Autocar. 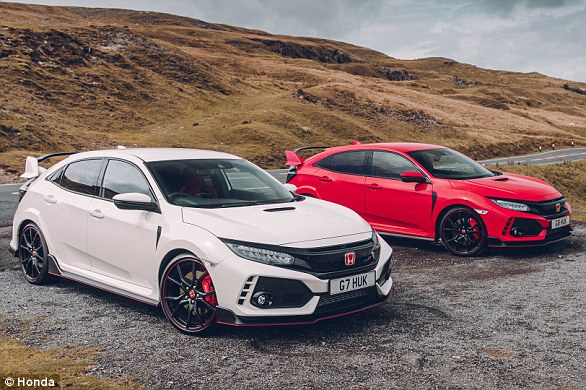 • The Honda’s Civic Type R had a double celebration being named by Autocar readers as their ‘favourite hot hatch of all time’ and also winning ‘Best Affordable Driver’s Car’.

• Six cars were named as industry ‘Game Changers’: the Hyundai i30 N, Kia Stinger, Volvo XC40, Jaguar I-Pace, Nissan Leaf and Audi A8 were all praised for ‘bringing new and higher standards to their classes and defying conventions to the benefit of car buyers.’