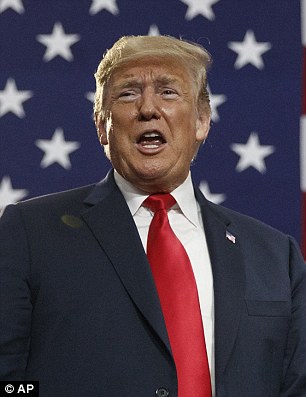 Wall Street traders sent the Nasdaq and S&P 500 indexes to record highs following a new trade agreement between the US and Mexico.

The deal helped the Nasdaq Composite rise 0.6 per cent after the opening bell, sending it above 8,000 for the first time, and car firms also saw shares rise. The S&P 500 gained up to 0.7 per cent to reach a record 2,897, and the Dow Jones Industrial Average rose by more than 250 points.

After the US and Mexico reached their deal to replace the North American Free Trade Agreement, officials said talks with Canada were expected to begin immediately in the hopes of reaching a final agreement by Friday.

Joe Kinahan, chief market strategist at TD Ameritrade in Chicago, said: ‘The question most people have is can the markets go higher? The answer is “yes”, earnings drive markets and this season has been an incredible one.’

The deal included measures to boost the automotive industry in the US. It saw shares in Ford rise 3.2 per cent, General Motors 4.6 per cent and Fiat Chrysler 4 per cent.

Investors were also cheered by Washington’s efforts to press the EU to speed up trade negotiations. However, Tesla fell 3.7 per cent after boss Elon Musk abandoned a plan to take the electric car maker private.