Food manufacturers are fighting back against Aldi, accusing it of producing knock-offs of their products.

The German discounter was labelled a ‘parasite’ after it was found selling a range of products almost identical to those made by smaller firms.

In a number of cases, Aldi is selling the copycat products for almost half the price charged by independent manufacturers.

Family sausage firm Heck and yoghurt maker The Collective are leading the revolt, joining forces to campaign against the issue. They say confused customers have complained to them. 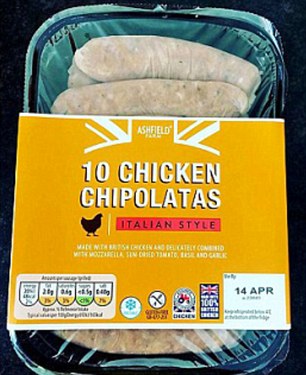 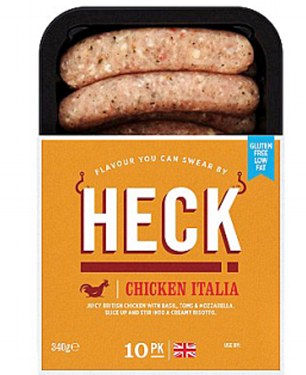 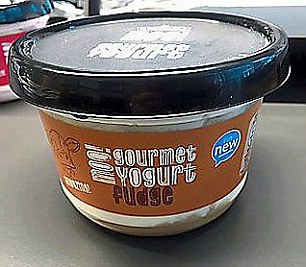 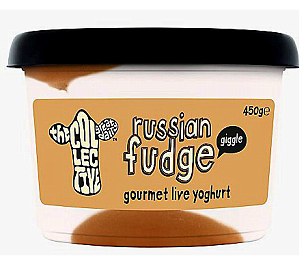 Aldi recently launched a luxury yoghurt range called Moo, left, bearing a striking similarity to The Collective’s gourmet yoghurt but at half the price 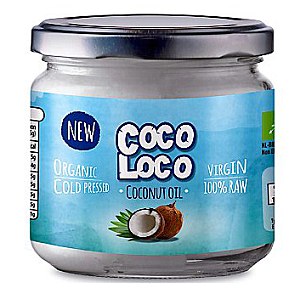 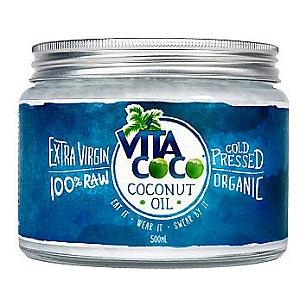 Andrew Keeble, a former Yorkshire pig farmer who founded Heck, has already approached Aldi asking it to stop selling its Italian-style chicken chipolatas. But he says he received a threatening legal letter in response.

Keeble said: ‘Effectively, Aldi is like a parasite sucking all the goodness and creativity out of our brand. I decided to make an initial stand because of the number of our customers complaining about a Heck chicken copycat.’

The Collective also accused Aldi of copying its brand. Aldi launched a luxury yoghurt range called Moo!, bearing a striking resemblance to The Collective’s gourmet yoghurt at half the price.

Amelia Harvey, co-founder of The Collective, said customers had been in contact to say they felt ‘duped’.

‘Aldi is deliberately trying to use the cues of successful brands to fool consumers in to buying them,’ she said. 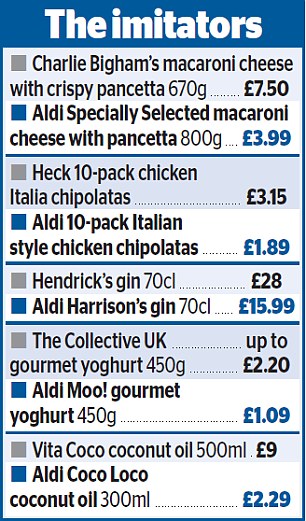 ‘Our brand has taken seven years to tirelessly build by a small team. In one fell swoop Aldi has taken that brand value and used all our cues to cause consumer confusion.’ Speaking to The Grocer magazine, Aldi UK & Ireland chief executive Giles Hurley denied it was copying brands.

He added: ‘What we do with our exclusive brands is identical to what the rest of the market does with own label, which is to draw cues and make products easily identifiable for customers without seeking to copy.’

Other copycat products identified include Aldi’s Coco Loco coconut oil and coconut water, which the supermarket has marketed as an alternative to Vita Coco.

Aldi has also launched a range of ready meals which it says are inspired by Charlie Bigham’s brand products, using similar ingredients and packaging.

Bigham has said in interviews that the business was an alternative to cheaper products offered by supermarkets such as Aldi.

‘Some people are very focused on price, which is why the discounters are doing so well,’ he said. ‘But a growing number of people … are willing to pay more for high-quality meals because it’s actually better value.’

Keeble said it would be difficult to challenge Aldi in court because of the cost involved.

Aldi lost a High Court case in 2014 after the Saucy Fish Company complained it was selling products bearing an uncanny resemblance to its own. The supermarket was forced to remove the products from its shelves.

An Aldi spokesman said: ‘Shoppers come to Aldi specifically to buy our exclusive own-label brands. We have not had any complaints from customers who feel they have been misled.’