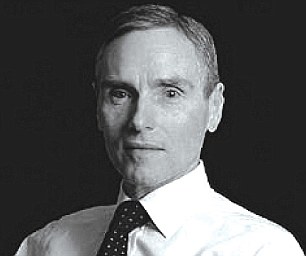 Barclays underestimates corporate raider Edward Bramson at its peril, a boss once ousted by the predator has warned.

Rodger Booth was pushed out his job as chairman of 4imprint in 2003 by Bramson, an activist shareholder who has recently built up a £1.9billion stake in Barclays.

Booth, 74, said that Bramson never engaged with his business or set out demands but got his way by winning support from other investors.

The retired boss, who lives in Yorkshire, said: ‘On a personal level he’s one of the most unpleasant people I’ve ever met – but having said that, he’s obviously a very clever businessman and very effective.

‘He does his research well and my view would be not to underestimate him at all. You could put me down as an admirer but not a lover.’

Speculation is raging over Bramson’s intentions after his 5.2 per cent holding in Barclays was revealed this week.

The predator’s financial firepower comes from a fund whose stated aim is to invest in a single target company, get a new chairman or executive directors appointed to the board, and boost profits.

It has triggered speculation he could try to sell the lender’s investment bank, which would set up a vicious clash with chairman John McFarlane and could force for the Bank of England to step in and protect financial stability.

Yesterday, Aviva, major backers of Bramson’s fund, rejected the idea that Bramson would push for a break-up of the bank but that has done little to allay fears he could cause disruption.

A seller of promotional products to businesses such as pens and mugs with a company logo on, 4imprint was targeted by Bramson 15 years ago after falls in its share price.

Booth recalled how the New Yorker mounted his raid from an office with barely any furniture in London, rented solely for the purpose.

It led to a vote of shareholders at which Booth was kicked out and then replaced by Bramson, who appointed new managers and drew up a new strategy.

The firm is now worth more than 21 times what it was then. Bramson’s staff met Barclays’ investor relations team after its annual results and asked questions about the business.

But the raider has not sat down with chief executive Jes Staley despite an offer of a meeting, and the lender does not know what his intentions are.

Booth said: ‘[Bramson] did nothing improper but he didn’t want to sit down and discuss anything.’

Gregg Hammann, who was pushed out as boss of US home fitness firm Nautilus in 2007 as it fought off a raid by Bramson’s company Sherborne Investors said: ‘I never heard a word from him.’