James and Daisy Callahan had just exchanged contracts on their dream home and were weeks away from moving in with their two-year-old child.

But before the transaction was complete and they got the keys, a catastrophic water leak ruined the house, causing more than £45,000 worth of damage.

Although their purchase had not yet finished, the Callahans were horrified to discover that it was they who were expected to have buildings insurance in place to cover emergencies.

The young family, who did not want to be pictured, say that they were never properly warned by their solicitor that they must get buildings insurance from exchange of contracts – and have been thousands of pounds out-of-pocket. 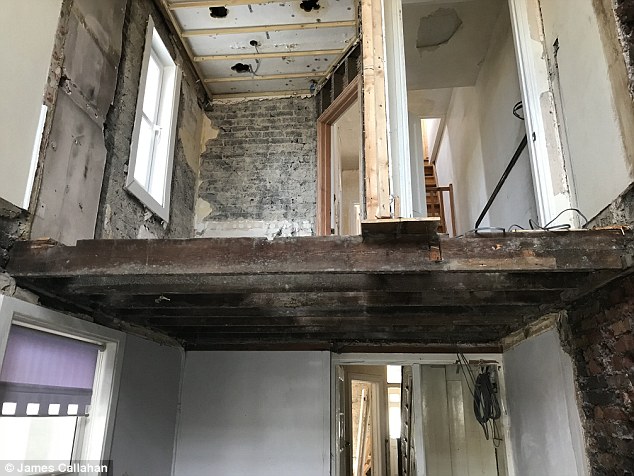 Fortunately, the family have managed to get an exceptional agreement for cover for the damage to the building from the previous owner’s insurance, but they must foot all the other costs themselves and have little say over the repair work.

The Callahan’s tale serves as a stark warning to other homebuyers as to why they must get insurance in place from the moment they exchange contracts.

Their solicitors argue that they were notified about this and other requirements in a document, which was then signed by the Callahans confirming that they had read it. However, the Callahans claim this information was not properly drawn to their attention.

James said: ‘We have complained to our solicitors about this “oversight”, however they feel they have done nothing wrong as it was mentioned somewhere deep in the 70-page title report.

‘However, both documents were simply emailed over to us, and even upon request the solicitors never took us through the key facts of these documents.

‘The solicitors have offered an insulting £250 to settle the matter – however we have been clear with them that damages are in the tens of thousands.’

Without buildings insurance of their own the young couple were forced to rent another house, paying two lots of council tax on top of their mortgage, in order to put a roof over their child’s head. 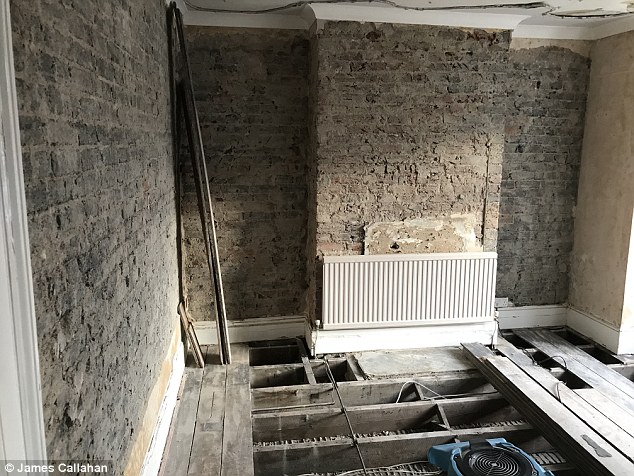 Six months on, they are still waiting to move in and say they can no longer afford the rent on top of their mortgage payments, and are being forced to couch surf at friends’ houses while the damage is repaired.

On top of this, they are not covered for the rent they have had to pay in the meantime – leaving them thousands of pounds out of pocket.

Who’s at fault, and what can the Callahans do?

When a buyer and seller exchange contracts on a house, the sale is then legally binding, and neither party can back out of the deal without compensating the other.

However, the deal is not fully sealed until completion, when the balance of the purchase price is transferred and then the buyer can move into their new home. This is typically a week or fortnight after contracts are exchanged.

It was in this grey area that the catastrophic leak happened in the Callahan’s new home.

When buying a property, it is up to the buyer to ensure buildings insurance is in place from exchange. However, the Callahans claim they were not made aware of this prior to signing.

A buyer’s solicitor has a duty of care to ensure they have all the information they need to make informed decisions.

The Callahans argue their solicitors breached this duty of care by not making it clear that insurance was needed to cover this grey period – something they say they couldn’t have been expected to know themselves.

When approached, the firm that represented the Callahans, McMillan Williams, said: ‘Our clients are advised in writing to purchase insurance prior to exchange of contracts when buying a property.

‘They are requested to sign a document before exchange of contracts confirming that they have carefully read about that and other requirements.

‘We are satisfied that that confirmation was signed in this matter.’ An expert from consumer legal specialist ME Group took another view and believes the couple could have cause for redress.

A spokesperson for the group said: ‘They have a legitimate case against the solicitor. It’s not good enough to email over a document and say “that’s job done”.

‘Their job is to point out the potential risks of just such an event occurring and making sure adequate protection is in place.

‘If the solicitor did advise – and the client ignored that advice – that’s a different matter. But that does not seem to have happened on this occasion. The client should make a formal complaint to the Solicitor’s Regulation Authority.’

While the buildings insurance issue may not have been explicitly brought to their attention, the crucial question is did the Callahans signing the solicitors’ document to confirm they had read all requirements absolve the firm of claims negligence?

Bethan Owen, partner in the real estate team at law firm Kingsley Napley, says that if the Callahans are correct then best practice may not have been followed but that does not mean there was negligence involved.

She said: Under the Standard Conditions of Sale, which are incorporated into standard residential sale contracts, the risk and therefore the obligation to insure passes to the buyer on exchange.

‘This means that if the property is damaged or destroyed between exchange and completion a buyer cannot terminate the contract and will be obliged to proceed with the purchase. ‘Assuming that risk passes on exchange to the buyer, the buyer has clear reasons to insure from exchange. A failure to advise a buyer of the need to insure may amount to negligence.

‘However, it does appear the reader was advised in their report to insure. Just because a solicitor does not apply best practice does not mean that they have been negligent. The standard a solicitor must meet is the standard of a reasonably competent solicitor.

‘However, I do not know whether this would be a successful claim as the reader was technically advised in the report, it was just not explicitly drawn to their attention.’