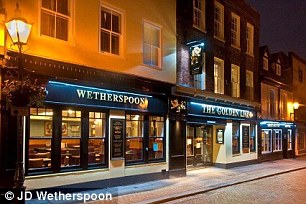 Wetherspoons has avoided the brunt of a slump in casual dining

Wetherspoons has avoided the brunt of a slump in casual dining because it is not a ‘trendy-type’ business, its Brexit-backing boss said.

High Street rivals such as Jamie’s Italian, Byron and Prezzo have all hit trouble in the past year, but Tim Martin, 62, said his pub chain was doing ‘quite well’.