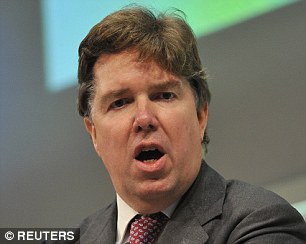 Still brooding ex-deputy Bank of England governor Sir Paul Tucker’s call for the Financial Conduct Authority to be stripped of its independence is a broadside at his former colleague, FCA chief Andrew Bailey.

Says my man in the pink tails: ‘Paul was like the unwanted stepchild.’

Sports Direct’s Old Etonian head of strategic investments, Liam Rowley, 28, who’s desperately struggling to be the respectable face of the loutish firm, insists plans are afoot to appoint a woman to its all-male board.

He tells Radio 4: ‘That is something we are desperately trying to correct and hopefully that should change soon.’

My suggestion: departing Lloyd’s of London boss Dame Inga Beale, 55, who won’t put up with any of Mike Ashley’s boozy tomfoolery.

Royal Mail shareholders’ humiliating 70 per cent rejection of rheumy-eyed boss Rico Back’s £2.7million pay package at yesterday’s AGM was embarrassing for the board.

The result of the vote was flashed up on the projector so quickly, few in the auditorium had the chance to even see it.

Aussie billionaire James Packer has renounced all 22 of his company directorships due to mental health problems.

As a 14-year-old, Packer Snr made him face cricket balls hurled at 120mph from a baseball pitching machine.

When the cricket coach turned the speed down to 99mph, the snarling old dingo barked: ‘What are you tryin’ to do, turn him into a wuss?’

Dome-headed Hattons of London boss Simon Mellinger, previously head of the London Mint Office, has had his company logo tattooed on his bicep to mark his first year of trading.

Says Simon, 54: ‘I can’t bring myself to tell my mum yet as she just wouldn’t approve. She would call me an idiot.’ Whatever gives him that idea?