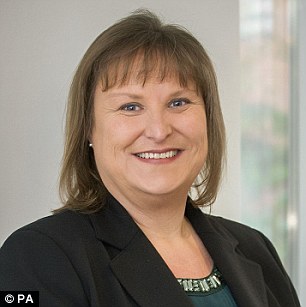 Whitbread chief exec Alison Brittain was awarded £2.1m worth of shares under two of the company’s share-based incentive plans

Top directors at Whitbread have been handed more than £12million of shares – as it prepares to spin off Costa Coffee.

Chief executive Alison Brittain, 53, was awarded £2.1million worth of shares under two of the company’s share-based incentive plans, while Costa’s managing director Dominic Paul, 46, got £2.5million.

The group’s general counsel Chris Vaughan, 53, and operations and transformation director Nigel Jones, 51, will get payouts of £1.3million and £2.1million each.

Simon Jones, 41, managing director of Whitbread’s Premier Inn and restaurants division, and Mark Anderson, 47, the head of Premier Inn in Germany, both got £1.4million.

The awards are based on past and future performance, some of which will be paid out in three years’ time.

The payouts come shortly after the £8billion hospitality firm confirmed it will list its coffee business separately.

Whitbread caved in to investor pressure after two hedge funds, Sachem Head and Elliott Advisors, took a stake in the firm to push for a break-up.

Rumours of a split had been brewing since last autumn when bankers Credit Suisse said that Whitbread could spin off Costa, and in doing so provide better returns for shareholders.

Costa is planning to open more drive-thru cafes and put its express machines into more shops and motorway service stations.

It is also ramping up expansion in China while Premier Inn wants to push further into Germany.

Whitbread announced it would split the business little more than a week after vulture hedge fund Elliott took a stake.

Whitbread’s share price has surged almost 9 per cent since Elliott invested in the firm.