Banks were once a staple for income seekers but have become unfashionable with investors since the financial crisis.

This is because they have been forced to pay tens of billions in fines for scandals including payment protection insurance (PPI), Libor-rigging and money laundering, leaving the dividend pot rather shallow.

But experts are talking up the biggest High Street lenders as an increasingly good investment for those who need their savings to work hard for them in retirement.

This is because from next August customers who think they have been mis-sold PPI will no longer be able to claim from their bank. 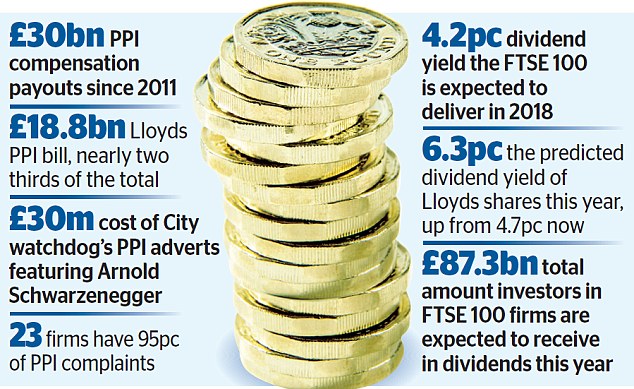 Banks have been forced to pay tens of billions in fines for scandals including PPI, Libor-rigging and money laundering, leaving the dividend pot rather shallow

This money has got to go somewhere, so investors are hoping it goes back into their pockets.

Fund managers say they have been topping up their holdings in banks in anticipation of a potential dividend bonanza.

One is Ed Meier, manager of the Old Mutual UK Equity Income fund, which has stakes in HSBC, Barclays and Lloyds: ‘What we are anticipating is that when the PPI hindrance goes away, we will get some very significant [dividend] growth from these companies.’

Lloyds accounts for an astonishing 63 per cent of the total PPI payouts, handing back nearly £19billion to its customers.

In 2017, the bank increased its PPI provisions by £1.7billion, nearly as much as the £2.2billion it paid to its 2.4m shareholders.

But just because the bank will no longer have to fork out for PPI, it does not automatically mean that money will end up in shareholders’ pockets.

Lloyds is investing £3billion to upgrade its digital capabilities, part of which could be paid for with the money saved on PPI compensation.

Laith Khalaf, of broker Hargreaves Lansdown, said: ‘Lloyds has been front and centre of PPI and so they stand to benefit the most from PPI disappearing into the rear-view mirror. But all of the major banks have PPI costs.’

PPI has been less of an issue for Barclays, costing it £9billion. However, its cash reserves have also been bled dry by a wide-ranging restructuring programme and a £1.4billion slap on the wrist from US regulators for mis-selling mortgage-backed securities.

Khalaf said: ‘The ending of PPI will be good for its dividend but it is still going through a transition so whether shareholders get anything in the short-term remains to be seen.’

HSBC pays a healthy income to investors. At £3.6billion, its provision for PPI isn’t insignificant.

But the UK market is just one part of its global business. Its worldwide earnings, therefore, will have a greater bearing on its dividend.

RBS hasn’t paid a dividend since it had to be bailed out by taxpayers during the financial crisis.

And the £5.1billion it has paid for PPI claims has been a millstone. However, it posted its first profit in ten years in February.

Even so, RBS faces a potential multi-billion fine from the US Department of Justice within weeks for mis-selling mortgage-backed securities.

Not only would this put a dividend on the back-burner, it would damage an already fragile business.

Russ Mould, of broker AJ Bell, said: ‘What investors want to see is banks keeping their noses clean, because if they can get the conduct and litigation charges down, it should free up a lot of cash which, in theory, should find its way to shareholders.’