When Auto Trader decided to launch a World Cup new car giveaway, it didn’t plan for it to cost quite as much as it already has.

Assuming England might struggle to hit the back of the net during the tournament, the car listings website launched a competition for a person to win a new motor each time the team scored.

But given the Three Lions success, it appears to have backfired. Five games into the World Cup and England have chalked up no fewer than 11 goals, which in turn has cost Auto Trader more than £187,000.

And with England setting their sights on a semi-final victory over Croatia on Wednesday, fans will be hoping it will be even more expensive for the firm. 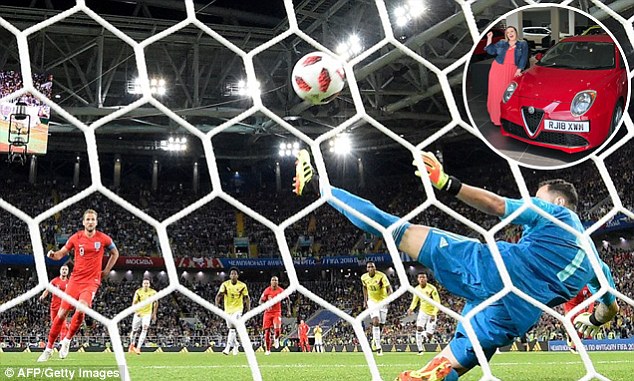 Back of the net! 24 year old Imogen Ryan (inset), a paediatric nurse from Reading, became the latest person to win a new car with Auto Trader after entering the competition

To be in with a chance of winning one of four different cars, football fans have been asked to tweet with #AutoTraderGoals each time England score.

With the hashtag trending on Twitter during every game so far, hopeful drivers have entered the competition 140,000 times already.

That’s partly down to the surprise number of goals scored by Gareth Southgate’s men, including the 6-1 drubbing of Panama in the second group game of the tournament – the game contained as many goals as England managed to score collectively in Euro 16′ and World Cup 14′.

As a result, Auto Trader is already struggling to source the free vehicles to hand out to keep up with the free-flowing goal fest.

In fact, the latest winners should expect to get a fairly well-specced car out of the deal, with the quota of more basic models already having been given to England-supporting drivers.

All four models it is giving away are part of a deal with FCA Group, with winners competing for either an Abarth 595, Alfa Romeo Mito, Fiat 500X or Jeep Renegade.

The total cost of the motors already handed out comes to just over £187,000 – more than Auto Trader had originally bargained for.

And Saturday’s quarter final victory over Sweden guarantees that there will be two more games where the automotive marketplace could have to fork out even more. 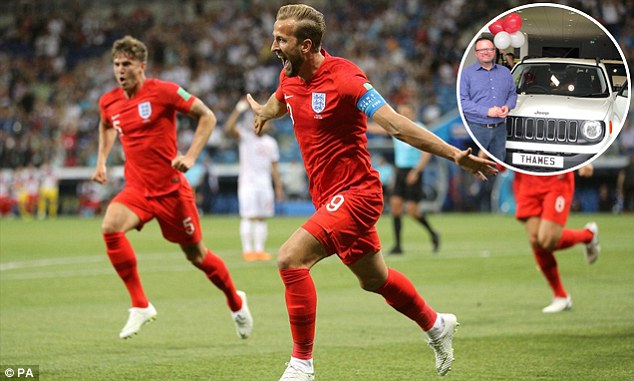 Football fans simply have to tweet #AutoTraderGoals when England score in the World Cup to be in with a chance of getting their hands on a free car. Nick Browne (inset) from Surrey won a Jeep Renegade when Harry Kane scored his first goal of the tournament against Tunisia 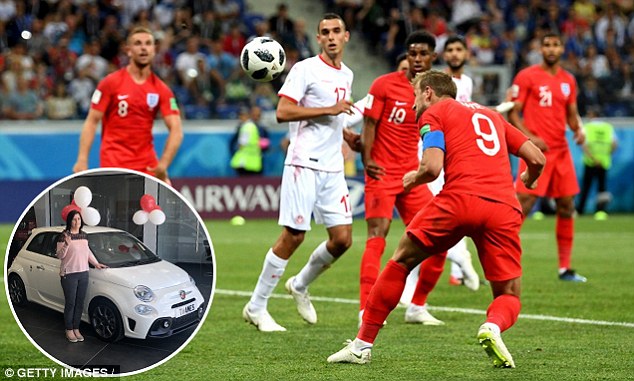 Victory at the weekend ensures England will either play in third place play-off game on Saturday 14 July if they lose to Croatia on Wednesday or – fingers crossed – win and make it to the final on Sunday 15 July.

And with Harry Kane in a rich vein of form and the current front-runner for the Golden Boot, Auto Trader’s World Cup could get more expensive.

Audience and brand director for the car sales platform, Lei Sorvisto, told This is Money: ‘With a campaign of this nature there are a number of big uncertainties.

‘In this case it was: how many goals will England score?’

‘Bookmakers will always be the safest guide – and most were predicting eight goals for the entire tournament.

‘But after the floodgates were opened against Panama in England’s 6-1 victory, we prepared ourselves for going over any initial estimates and had to commit to putting our money where our mouth is.’ 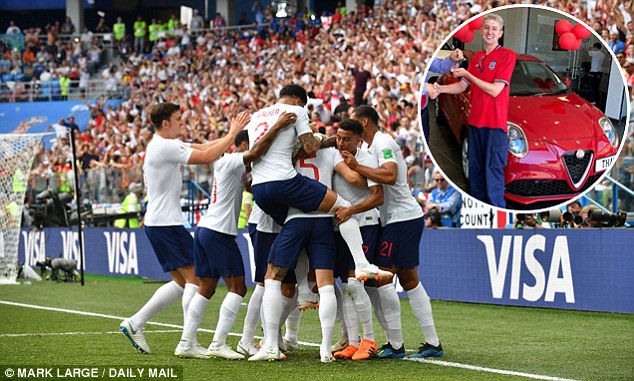 Auto Trader admitted it hadn’t foreseen England scoring so many goals in the competition. The 6-1 win against Panama was the biggest contributor, with David Shropshire (inset) from Staffordshire bagging an Alfa Romeo Mito after tweeting during celebrations for John Stones’ opener 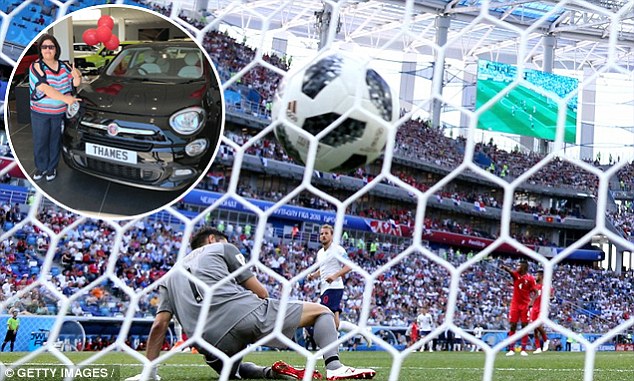 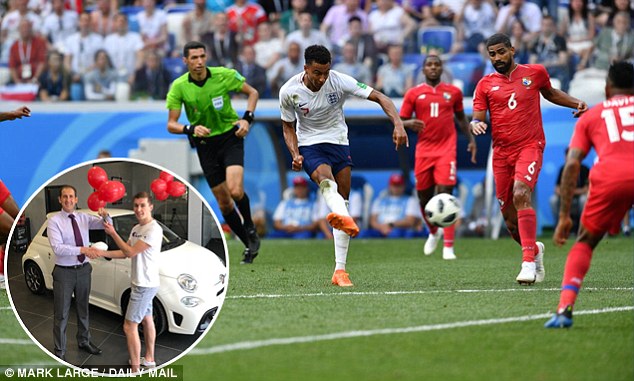 Jesse Lingard’s goal against Panama has been the pick of the bunch in the competition so far. Chris Harwood from Wiltshire (inset right) would have enjoyed it more after being told he had won an Abarth 595

Despite already exceeding the initial estimation for the number of vehicles it would have to hand over for free, Lei Sorvisto said the campaign has become its biggest marketing success to date.

She added: ‘Deciding to launch #AutoTraderGoals during England’s best chance to win the World Cup in over 50 years might seem like a miscalculation financially, but it’s turned out to be Auto Trader’s biggest brand promotion to date, and we’re enjoying every minute of this incredible journey with the Three Lions.’ 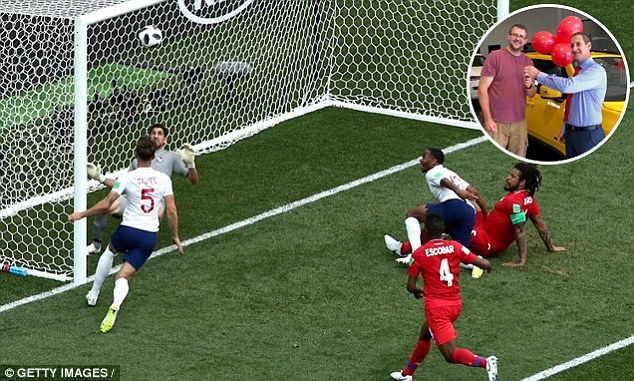 Stones scored his second against Panama in the 40th minute. Mark Rayner (inset left) from Gloucestershire saw it, tweeted and won a Fiat 500X 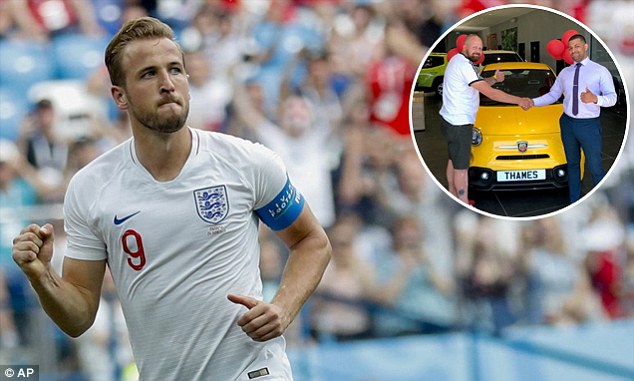 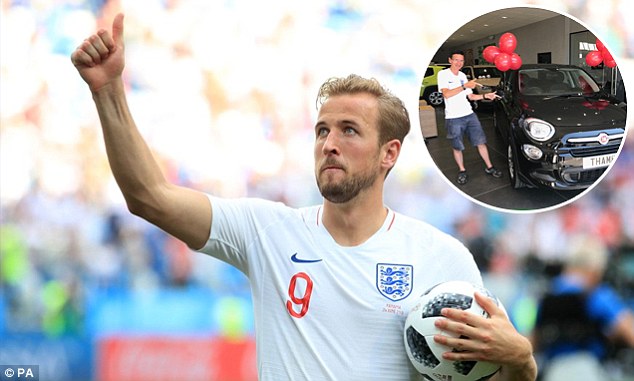 Kane capped his hat-trick against Panama with a fortunate 62nd minute deflection. Neil Harvey (inset) from West Sussex cheered twice when he was informed he’d won a Fiat 500X

Imogen Ryan, a 24-year-old paediatric nurse from Reading, became the latest winner on Tuesday when she used the hashtag after Harry Kane’s scored a penalty in the 57th minute against Colombia in the last-16 knockout stages.

And she’s already collected the keys to her new Alfa Mito.

‘I was crying with joy when I found out I had won,’ she said.

‘I’m 17 weeks pregnant and we desperately need a new car – so to win one in this way after such a dramatic end to the game was beyond a dream.’