The co-founder of messaging app WhatsApp who quit over privacy concerns is still turning up to work so he can collect more than £640million in stock awards.

Despite leaving the firm in April, Jan Koum has been forced to pop in to the office of Facebook, WhatsApp’s parent, in order to qualify for his multi-million pound deal.

Coming to the office every month is a requirement of his entitlement to phased awards of 24.85million restricted shares he was granted when he sold his company to the web giant four years ago. 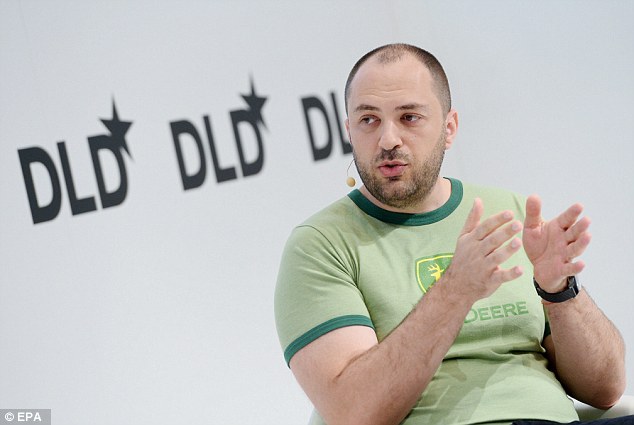 Despite leaving the firm in April, Jan Koum has been forced to pop in to the office

The 42-year-old’s arrangement is part of an astonishing practice known in Silicon Valley as ‘resting and vesting’ or ‘coasting’, when employees are given little work but are allowed to stay at their company to pick up stock awards.

Koum still had 7.1million shares to pick up when he quit. He since received 2.5million in May, worth about £360million at the time. Another 4.6million – worth about £642million at today’s prices – will vest in two further tranches in August and November. Koum is last said to have visited Facebook offices in July, according to the Wall Street Journal.

A spokesman for the company refused to comment on his schedule but claimed he was still employed and was working on various projects, as well as helping executives deal with his departure. Koum’s exit was reportedly linked to tensions between executives at WhatsApp and Facebook over privacy.

Facebook wants access to the data of WhatsApp’s users to help sell advertising, a move Koum and co-founder Brian Acton are said to have opposed. The pair agreed to sell their business after having dinner at Facebook boss Mark Zuckerberg’s house, with the deal making them billionaires overnight. They are later said to have clashed repeatedly with Zuckerberg and operating chief, Sheryl Sandberg, over how to make WhatsApp profitable.

Facebook had originally promised the messaging app would remain independent, but less than two years’ later it began pressuring WhatsApp to give it access to users’ phone numbers and other information.

This sparked a standoff with European regulators, who branded a change in conditions, which said users could not use the app unless they handed over data, illegal.

It also ramped up tensions with Koum and Acton, who had previously declared they didn’t want their app to become ‘just another ad clearing house’.

They are said to have been particularly opposed to introducing targeted ads, a proven but controversial money-maker for Facebook.

Over time, the row deepened and Acton resigned in September. He later became an investor in rival messaging app Signal. Koum announced he was quitting seven months later, telling staff: ‘It is time for me to move on.’

He added: ‘It’s been almost a decade since Brian and I started WhatsApp, and it’s been an amazing journey with some of the best people.’ Writing on Facebook, Zuckerberg replied: ‘Jan, I will miss working so closely with you.

Koum, who is worth more than £7billion, has said he will now spend his time collecting Porsches. His ‘resting and vesting’ at Facebook is just one example of what is said to be a widespread practice at California’s tech companies.

It was depicted in an episode of US sitcom Silicon Valley, with actor Josh Brener telling Business Insider: ‘I’ve actually had a number of people send me pictures of themselves on a roof, kicking back doing nothing, with the hashtag “unassigned” or “rest and vest”.

‘It’s something that really happens, and apparently, somewhat often.’