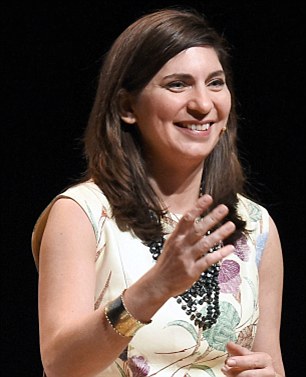 The New York Stock Exchange (NYSE) has appointed its first female boss in its 226-year history.

Stacey Cunningham, 43, will take over from current president Thomas Farley later this week.

She is being promoted from chief operating officer and has worked at the Wall Street institution for almost two decades, aside from a stint training as a professional chef.

Cunningham said: ‘Since the moment I first stepped on to the trading floor over 20 years ago, the NYSE has always held a special place in my heart.

‘I am humbled and honoured to have the opportunity to lead this organisation.’

The new boss started her career at the exchange as an intern in 1994 while studying industrial engineering at the Lehigh private university in Pennsylvania.

‘I was actually trying to get a job waitressing and they wouldn’t hire me because I didn’t have the experience,’ she said in an interview last year.

‘I just fell in love with the floor. As soon as I walked out there I thought, this is what I want to do.’

But in 2005 she grew tired of the NYSE’s antiquated technology and jumped ship to catering, which she dubbed culinary leave, taking a nine-month course at the Institute of Culinary Education in New York.

It included a six-week placement at Ouest on the Upper West Side. ‘The environment was so much like the trading floor,’ she said.

She then spent five years in increasingly senior jobs at rival exchange Nasdaq before returning in 2012 to the NYSE.