Rectories have a certain romance. Some of our best known authors — Jane Austen, John Betjeman, Alfred Lord Tennyson, A. A. Milne and the Bronte sisters lived for a time in one.

Though not always in great comfort. The Old Rectory in Farnborough, Berkshire, where Betjeman lived, for example, had no electricity, mains drainage or running water until he sold it in the Fifties.

His wife, Penelope, was known to bring her horse into the sitting room and his friend, Evelyn Waugh described conditions there as ‘lightless, stuffy; cold’. Things have improved since then. 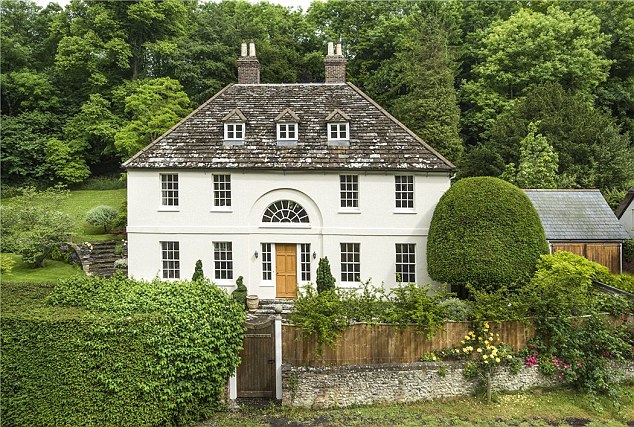 Classic design: Rectories are often located centrally in their communities close to amenities

‘Buyers recognise their benefits,’ says Luke Morgan, director at Strutt & Parker’s national country house department. ‘They usually have a central village position, alongside the church and not far from the pub. They have balanced gardens, pretty church views and interesting architecture.’

The rectory (and to a slightly lesser extent the vicarage, which is often smaller) was traditionally a significant house, built for an important figure in the community.

Typically, a rectory has four large, high-ceiling reception rooms, ideal for entertaining and six or seven bedrooms. It is usually set in good-sized gardens and often has a couple of paddocks.

Rectories are so well regarded they even have their own appreciation society rectorysociety.org.uk. Members enjoy visits to past and present clergy homes and the churches they serve and there’s a network to exchange practical advice about conservation.

There is something special about a home built for a clergyman and his family. ‘When we moved in here, we found that the architect P. D. Hepworth and the builder, Pratt & Sons had scratched their names on upstairs window frames,’ says Robert Groom, 72, who is selling The Old Vicarage, Bittaford, Ivybridge, Devon, for £720,000 with marchandpetit.co.uk.

‘There were lots of Arts & Crafts features and the previous owner told us it had been The Daily Mail House of the Year in 1925.’

According to research carried out by estate agents Jackson-Stops, rectories are also good value. Despite costing on average £1,342,318, they are less expensive, at £261 per square foot, than other desirable English village properties — manor houses, farmhouses or cottages.

Jessica Taylor and her husband Terry, 50, bought The Old Rectory in Drewsteignton, Dartmoor, for £1,150,000 in April 2017. The house offers the opportunity for dramatic improvements.

‘Work starts next March,’ says Jessica, who spent eight years abroad with Terry’s work in IT software. ‘We are keeping the Georgian frontage exactly as it is, but the back part of the house, which is Victorian, has been tinkered with already so we are going to knock through a laundry and an old staircase to make an open plan kitchen and breakfast room, leading to an orangery. We are also building a cinema/den for our three boys.’

There are more realistically priced options, though these are harder to find. The Laurels in Wistanstow, Shropshire, has three reception rooms, five bedrooms and three bathrooms, and is for sale for £495,000 with struttand parker.com.

There are drawbacks to owning a rectory. Such big houses can be expensive to heat. They are also often listed, which means there are restrictions on the kind of improvements that can be made. But that does little to deter fans.

‘An old building like this feels solid,’ says Raili Fraser, who is in her 70s and has lived in her Leicestershire rectory for 36 years. ‘We are also at the heart of village life. The locals still hold the summer fete here, just as they have done for centuries.’

Sadly, Raili now finds the house too big for her needs and is selling.

The Old Rectory, Churchgate, Hallaton, Leicestershire, which has four reception rooms and six bedrooms, is for sale for £1.65 million with fishergerman.co.uk.