Why you MUST steer clear of Russian funds

Thousands of football fans will head to Russia next week for the 2018 World Cup, but would you invest your money there?

The oil and gas-rich nation will be in the spotlight during the tournament – and the influx of supporters will provide a boost to the Russian economy.

But experts say putting your money in Russian companies could be an own goal for investors.

Not only do you have to stomach a political regime that may be unpalatable to many, but you would also have to be prepared for a rocky ride. 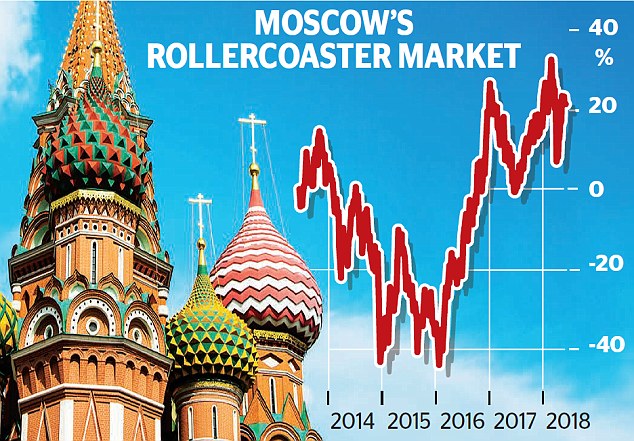 Eastern promise? Experts say putting your money in Russian companies could be an own goal for investors

These funds are some of the most volatile in the world. Many who invested in Russia before the global financial crisis enjoyed some stellar returns – only to then see the value of their investments plunge.

Tom Becket, chief investment officer at Psigma, says: ‘Russia is a bit like the England football team, it has a chance of outperforming but there are other countries you would back for a safer bet.’

The Russian economy is very sensitive to oil prices. Indeed, some 53 per cent of the MSCI Russia Index, which tracks the Russian stock market, is in the energy sector, with oil giants Lukoil and Gazprom accounting for 15 per cent and 13 per cent of the index respectively.

That’s been something of a boon for the past couple of years as the oil price has started to rise again – the price of the black stuff hit $80 a barrel last month and is up 52 per cernt over the past year.

Optimists also say the economy is improving and consumer spending is starting to pick up as interest rates fall, with more mortgage transactions starting to occur.

But the country’s stock market plunged in April after US President Donald Trump announced sanctions against it, and it is down 12 per centr over the past year.

Darius McDermott, managing director at Chelsea Financial Services, says: ‘The fact that specific companies were named in the sanctions shocked investors and increases the risks around investing in Russian stocks.’

Among the worst hit companies were Lukoil and banking firm Sberbank, but some investors think they have been unfairly targeted.

Rob Secker, investment director of the M&G Global Emerging Markets fund, has recently increased his investment in both stocks. The fund would have turned £10,000 into £13,400 over the past five years.

Emily Whiting, investment specialist at JP Morgan, says the country can also be a great hunting ground for income investors as companies are paying dividends to prove to shareholders they can be trusted.

Whiting, whose fund would have turned £10,000 into £12,240 over the past five years, invests in stock market company Moscow Exchange, the Russian equivalent of the London Stock Exchange.

McDermott says investing through these general emerging markets funds is a less risky strategy but adds: ‘If you do want to invest directly, the go-to-fund is Neptune Russia & Greater Russia but investors should remember it can be very volatile.’

Becket disagrees. Those who are willing to ride out the ups and downs may be better off choosing a low-cost tracker fund, which matches the performance of the Russian stock market, such as the iShares MSCI Russia ETF.

But, he adds: ‘I think there are better places to put your money than Russia.’