Why you must watch the cost of index investing

Passive investing is all about keeping it simple and low costs.

But the latter element will prove a problem if you buy Virgin’s FTSE All Share Tracker, which charges an astonishing 17 times more than its cheapest rivals from HSBC and IShares that invest in the same index.

Over the past five years, the return on £1,000 would have been £1,246 for investors using the Virgin fund to invest in the broad UK stock market, according to FE Analytics, compared to the £1,441 someone who bought the iShares tracker would have. 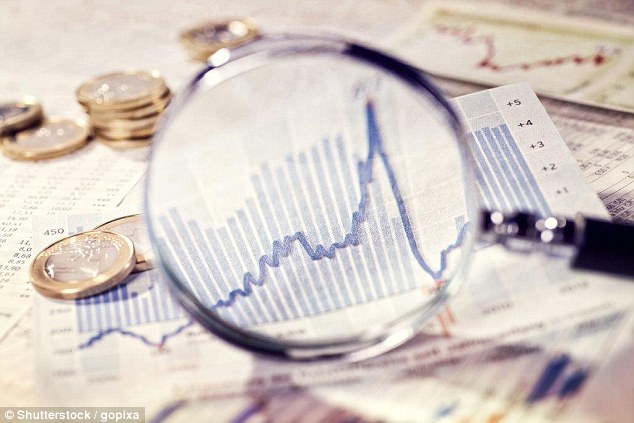 Virgin’s index fund has ongoing charges of 1 per cent – considerably outstripping not just other rival trackers, but also a sizeable chunk of actively-managed funds that pay a manager to pick the best investments

That compares to ongoing charges of just 0.06 per cent on its cheapest rivals, iShares UK Equity Index and HSBC’s FTSE All Share Index fund.

The gulf in costs between the two funds, illustrates how even those who have decided to commit to low cost passive investing must keep a keen eye on charges.

Unlike actively-managed funds, where the portfolio manager cherry picks investments in a bid to beat the market, passive funds seek to simply replicate the performance of the index they track – nothing more.

They don’t require a team of experts behind them, just an automated investment process, and are typically cheaper than active funds as a result.

And that means that for investors there is little point in paying extra for an index fund that does exactly the same thing as a cheaper rival.

When asked to justify its tracker fund’s fee and performance, a spokesman for Virgin Money said the charge is inclusive of platform costs, stating: ‘It is important that customers look at charges as a whole when comparing investment providers.

‘Not all companies’ charges are as simple as ours; many will charge the cost of the fund in addition to a platform fee.’

However, investing in the iShares fund through Hargreaves Lansdown, one of the more expensive DIY platforms in the market, which charges 0.45 per cent on funds held, would only bring the total cost up to 0.51 per cent.

That’s still only about half that of the Virgin fund. 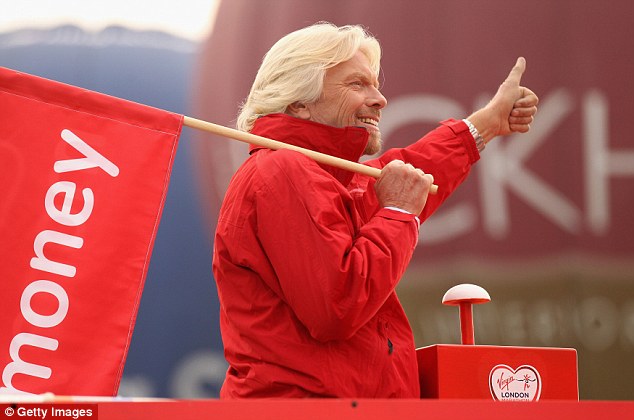 Adrian Lowcock, investment director at multi-manager investment company Architas, said: ‘Around 20 years ago passive funds were expensive – not far off the cost of an actively-managed fund.

‘But a growth in demand for passive investments has allowed the sector to benefit from economies of scale and new competitors entered the market creating a price war in passives, driving the costs from as much as 1 per cent down to less than 0.10 per cent in some instances. That has a big impact on returns.’ 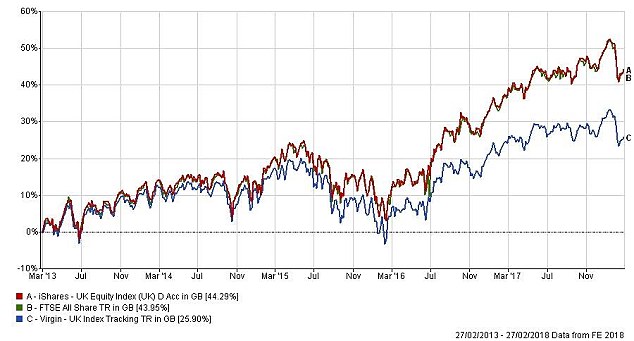 What to watch on index fund costs

Tracker funds and ETFs almost never exactly replicate the performance of a given index. This is partially because of the potential for tracking error – explored in greater depth here – but mainly because fees eat into returns.

Even a slight difference in price between two index funds can have a significant impact on your profits. And this is magnified over time, as the compounding effect of charges on charges takes hold.

It also worth pointing out that fund managers are now forced to disclose the transaction costs of their funds under new rules introduced at the start of 2018 under a European Union directive, Mifid II.

At present, figures seem to show that the Virgin tracker does not levy its transaction costs on investors, while the iShares fund passes on a 0.03 per cent cost.

So the total fund charges that apply to Virgin’s and iShares’ funds are 1 per cent and 0.09 per cent respectively – reducing the gap so that Virgin’s is only 11 times more expensive.

The real effect on investors’ accounts is shown up in the cold hard figures of investing a lump sum over time, however.

According to FE Analytics, the Virgin fund returned 25.9 per cent over the past five years to 26 February 2018, which is just over half that of the 44.29 per cent achieved by the iShares fund over the same period.

Virgin is not the only investment provider to charge a pretty penny for a FTSE All Share passive fund.

The Janus Henderson UK Index fund has an OCF of 0.7 per cent, but those who invest through a DIY platform pay an OCF of 0.36 per cent.

And  price discrepancy among trackers is not just evident in those following the FTSE All Share.

Scottish Widows UK Tracker,Janus Henderson UK Tracker and Marks & Spencer UK 100 Companies are among the pricier trackers of the FTSE 100.

They carry ongoing charges of 1 per cent, 0.7 per cent and 0.6 per cent respectively – considerably more than the iShares 100 UK Equity Fund which is the cheapest option at 0.08 per cent.

A tool to find ETFs

The wider choice of ETFs compared to tracker funds allows people to invest around the world cheaply and also in indices that target certain elements, such as dividend-paying firms

A Janus Henderson spokesman said that the UK index fund was only available to professional investors, while M&S Bank’s spokesman said the charge factors in platform costs ‘offering customers a transparent and easy-to-understand account structure.’

A spokesman from Scottish Widows said: ‘When the fund was actively marketed, it had a bundled annual management charge that recovers all costs incurred in setting up, administering and managing the investment and plan wrapper, including the cost of initial advice.

‘This is not comparable with the cost of investment for those funds where the costs of advice and platform charge are identified separately. We regularly review charges to ensure they offer fair value for customers.’

Virgin offered the defence that its All Share tracker fee of 1 per cent includes the cost of where investors hold it, known  as the platform charge.

However, it is worth noting that is only the case for those who buy it direct. It is also possible for investors to buy the Virgin tracker through other platforms, such as Hargreaves Lansdown, where they would end up paying its platform fee too.

It is important to remember that fund charges don’t represent the total cost of an investment – you should always factor in platform charges too. However, even then expensive trackers rarely make sense.

Those seeking out the absolute cheapest index investing option should look for both a good value tracker fund or ETF and a platform with low charges.

Club Finance’s Frequent Trader has no platform charge if you buy or sell at least three times a quarter at a cost of £4.95 per trade. iWeb has no annual charge but a one-off £25 joining fee and it costs £5 to buy or sell funds.

Some brokers, including Interactive Investor and Alliance Trust Savings, charge a pounds and pence fixed fee, which typically works out better than percentage charges for those with big investment pots.

Remember some platforms offer free fund dealing, while others charge. Meanwhile, if you buy ETFs you will most likely pay share dealing charges.

Lowcock added: ‘If you are investing in passive funds you don’t really need an all singing, all dancing platform as effectively you are just paying for services you don’t use. So choose a low cost reliable platform which suits your investment style.’

We asked Peter Sleep, senior investment manager at Seven Investment Management, for a checklist of what to look out for when choosing a passive investment:

1. Make sure that the fund is Isa eligible – search for the fund’s fact sheet.

2. Make sure that it is a ‘UCITS’ fund – this ensures that you have some very good investor safeguards. This should be in the title of the fund.

3. Make sure that the fund has UK Tax Reporting Status if it is based in an off-shore financial centre like Ireland. This will make sure you do not get in trouble with the UK tax man. This should be on the fund fact sheet. UK-based funds do not need Tax Reporting Status.

4. Understand what the fund is trying to track – this is sometimes obvious, but it is worth spending five minutes looking at the index description and the top 10 holdings on the fund fact sheet.

5. Once you have taken these steps you can start to think about cost. For the big market indices, that you might see reported on the TV news, you should not pay much more than 0.1 per cent.

This cost will rise for the Asian and emerging markets towards 0.3 per cent as dealing in these far flung places can be expensive.

If you are looking at bonds you should expect to pay between 0.1 per cent and 0.5 per cent depending upon whether you are dealing in plain gilts or emerging market debt or high yield debt.