Bookie William Hill has claimed that a looming Government crackdown on fixed-odd betting machines will make the company a target for a foreign takeover and place 20,000 jobs at risk.

The betting giant, for which these terminals represent one of the biggest sources of profit, said a decision to slash the maximum bet from £100 to £2 would be ‘catastrophic’ for the company.

In a letter addressed to Culture Secretary Matt Hancock, William Hill’s chairman Roger Devlin said: ‘The jobs of around 20,000 people are at risk if the decision is made to cut … gaming machine stakes to £2. 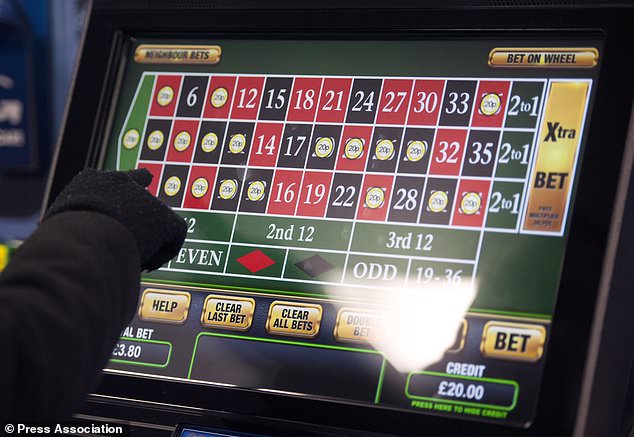 Addictive: Fixed-odds machines have been described as the ‘crack cocaine’ of gambling

‘Consolidation within our sector continues and I would also not want to see the impact of a disproportionate triennial outcome being a factor in the name of William Hill being added to the list of companies now in foreign ownership.’

William Hill’s claims come as Hancock is expected to follow campaigners’ advice and slash the maximum stake to £2 later this week.

The Government launched a review of fixed-odds machines last October, saying it would reduce the maximum stake to a figure between £50 and £2.

The consultation was launched following concerns that gamblers were able to place bets of up to £100 every 20 seconds on these machines, which, for this reason, have been dubbed the ‘crack-cocaine of gambling’.

According to the most recent figures by the Gambling Commission, there are 33,611 fixed-odds machines in the UK.

People spent approximately £1.8billion from April 2016 to March 2017, accounting for 56 per cent of betting companies’ profits.

But yesterday they jumped by nearly 10 per cent after a US court ruling in favour of the industry.

The Professional and Amateur Sports Protection Act has outlawed betting on sport in all but Delaware, Montana, Nevada and Oregon since 1992.

However, yesterday’s ruling made it legal in the state of New Jersey, paving the way for more states to legalise sports betting.